An HP Engineering Workstation Disguised as an Ultrabook 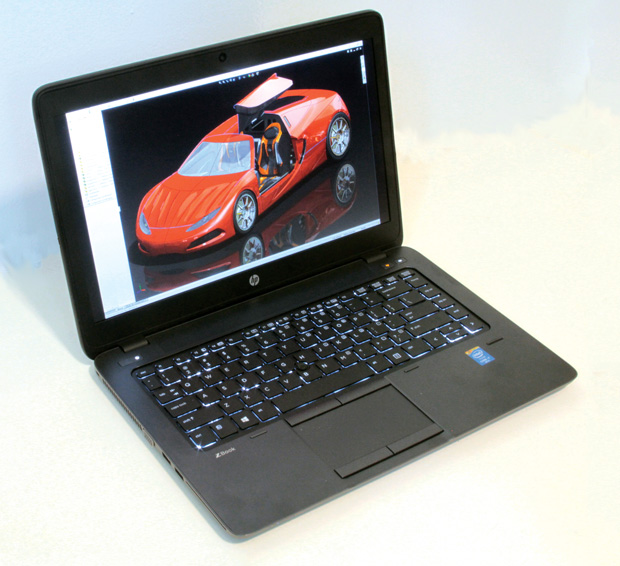 While we have reviewed many HP Z-series workstations, it has been nearly three years since we last looked at a mobile workstation from HP. So we were quite happy when HP sent us its latest entry-level mobile workstation, the ZBook 14 G2, an update to the original ZBook 14 introduced several years ago.

HP refers to this thin, lightweight, solid-state mobile workstation as the “industry’s first mobile ultrabook,” and positions the system as a value-priced entry-level mobile workstation. Regardless of what you call it, the ZBook 14 G2 is likely the only 14-in. computer that qualifies to be called a workstation.

HP ZBook 14 G2
Weighing just 3.9 lbs. (plus 13 oz. for its tiny 65 watt A/C power supply and cord), the HP ZBook 14 G2 is truly portable. It features a brushed aluminum exterior skin bonded to a magnesium-alloy chassis that measures 13.35 x 9.33 in. and is just 0.83 in. thick. The HP logo is centered in the top panel, which is surrounded on three sides by curved edges with a rubberized coating, making it easy to grip the system for carrying.

Raising the lid reveals an 86-key backlit keyboard with a mostly conventional layout and a good feel when typing. Our evaluation unit included a pointing stick nestled between the G, H and B keys, with dedicated left and right buttons below the spacebar. There is also a 3.8 x 1.12 in. touchpad centered in the palm rest, with its own dedicated left and right buttons below. A fingerprint reader is positioned below the right corner of the keyboard and a pair of speakers situated above.

The power button is located in the upper-left, above the keyboard, and glows white when the computer is on. To the upper-right of the keyboard are dedicated buttons to toggle the built-in wireless capabilities and mute the speakers. The caps lock and number lock indicators are within the keys themselves. LEDs along the left front edge of the case indicate wireless, power, charging status and hard drive activity. These glow but are not at all distracting.

Our evaluation unit came with a beautiful 14-LED FHD UWVA anti-glare 1920 x 1080 display, which added $75 over the base 1600 x 900 panel. Touchscreen capability would add another $125 to the price. An optional 720p HD webcam ($24) was centered above the display, flanked on the right by a white LED that lights when the webcam is active.

The HP ZBook 14 G2 provides a few more ports than many other thin, lightweight systems. For example, along the right side is a combination microphone-in/headphone-out jack, a DisplayPort, two USB 3.0 ports, an RJ45 network port, a docking connector, and the port for the external A/C power. On the left side are two more USB 3.0 ports (including one that can charge external devices), a VGA port, a smart card reader, and a security cable slot.

The base ZBook 14 G2 configuration comes with just 4GB of RAM. Our evaluation unit came with 16GB, installed as a pair of 8GB DDR3 1600MHz DIMMs (dual in-line memory modules), the maximum that the system can accommodate. This added $310 to the base price.

Unlike other ultra-thin laptops, the bottom of the ZBook 14 G2 is removable for easy access to the replaceable 3 cell 50 WattHour battery as well as the hard drive bay, memory slots and sockets for accessories like the optional broadband module. The ZBook 14 G2 can accommodate both an internal hard drive and an HP Z Turbo Drive, essentially a SSD (solid-state drive) on a PCIe mini card. Our evaluation unit came with a 256GB SSD installed in the drive bay. HP also offers SSDs up to 512GB and standard SATA drives with 512GB or 1TB capacities that can be installed in addition to the HP Z Turbo Drive. The 256GB SanDisk SSD in our system was a $358 option. At $398, the 256GB Turbo Z Drive might be a better choice—particularly if you also added a large data drive.

A removable bottom panel makes the ZBook 14 G2 perhaps the only ultrabook with serviceable components. Image courtesy of David Cohn.

HP also sells a number of accessories for the ZBook 14 G2, including an external DVD+/- RW drive ($69) and an UltraSlim docking station ($149), but this is a side-docking solution due to the system’s thin design. Near field communication and mobile broadband are also available.

With its frugal power consumption, we expected the battery life to be quite good, but the results of our battery run-down test surprised us. The system ran for nearly 7.5 hours on a charge, the best result we have ever recorded for a mobile workstation.

Unfortunately, the tradeoff for being thin, light and thrifty is performance that definitely placed the ZBook 14 G2 at the lower end of the mobile workstation spectrum. On the SPECviewperf test, which looks solely at graphics performance, the HP ZBook 14 G2 lagged behind most of the other systems that we’ve tested over the past several years.

On the SPECapc SolidWorks benchmark, which is more of a real-world test, the ZBook 14 G2 did a bit better. Although it fell well behind many of the other mobile workstations we’ve tested recently, it did edge out the original Dell M3800 we reviewed last year.

But on the AutoCAD rendering test, a multi-threaded test where systems equipped with fast, multi-core CPUs have a distinct advantage, the HP ZBook 14 G2 lagged far behind the rest of the field, averaging more than 2 minutes to complete our test rendering. Those results were not unexpected. The ZBook 14 G2 is built around a dual-core CPU while all the other mobile workstations we’ve reviewed recently incorporated quad-core processors. According to HP, the company opted for dual-core CPUs in the ZBook 14 G2 because the thin and light form factor doesn’t allow enough space for the thermal requirements to include quad-core CPUs. That explanation seemed a bit curious, however, because the HP ZBook is a fraction thicker than the Dell M3800.

The ZBook 14 is also the only system we’ve tested recently that offers an AMD graphics card as the only discrete GPU option. Again, an HP FAQ provided an explanation: “The ULT processors on the HP ZBook 14 G2 work with the discrete AMD FirePro graphics to provide up to mid-level workstation-class performance. However, for heavily threaded applications or users requiring the greatest CPU performance, the HP ZBook 15 G2 and 17 G2 should be considered.”

Interestingly, the AMD Catalyst driver automatically determines whether to run an application on the Intel HD graphics or the discrete AMD graphics. For most CAD and DCC software, the decision was straightforward and the software got it right. But for some of our benchmarks, particularly the SPECviewperf test, it guessed wrong and initially ran the test on the Intel graphics, resulting in terrible performance and some view sets that the system was unable to complete. You can, however, manually configure the AMD drive if necessary, which we did in order to obtain the best results.

Throughout our tests, the HP ZBook 14 G2 was practically silent. HP preloaded Windows 7 Professional 64-bit. Windows 8.1 is also available as well as FreeDOS and Ubuntu Linux. Like all of its other workstations, the ZBook 14 G2 is ISV (independent software vendor) certified and backed with a three-year warranty. Longer warranties as well as options such as next-day on-site service and accidental damage protection are also available.

The HP ZBook 14 G2 stands out as the lightest mobile workstation currently available. It looks great, has user-serviceable components, and delivers decent performance coupled with amazing battery life. Although our system priced out at $3,022 as configured, HP is currently offering a 30% discount, bringing the cost down to $2,115. At that price, the HP ZBook 14 G2 is hard to beat.