Advanced CFD at the Helm in Competitive Sailing 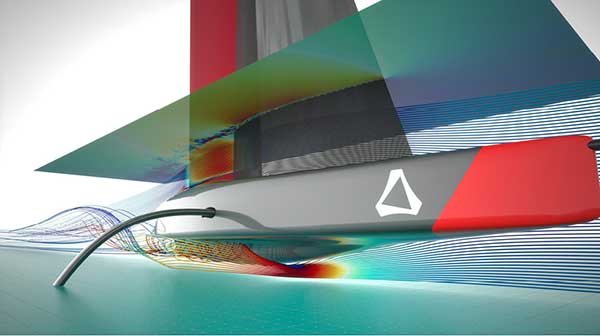 PTC is a computer software and services company founded in 1985 and headquartered outside of Boston, Massachusetts.
PTC
Company Profile

“CFD for yachts started to gain importance in 1983, when John Bertrand on Australia II with its high-tech winged / inverted keel took the cup from Dennis Connor on Liberty, breaking the longest winning streak in the history of sports (132 years). Technology, from any and every design aspect, was sought to bring the cup back to the U.S., and CFD benefited from that urgency. From our perspective, that movement began our involvement with the design program for Dennis Conner’s 12-meter yacht Stars and Stripes ’87. For that campaign, vortex lattice, panel codes and even some initial Navier-Stokes methods were all brought to bear on the underwater design,” the paper stated.

“The level of CFD use in boat races has been increasing,” says Dr. Paul Stewart, vice president, automotive aerodynamics modeling and visualization at Altair. “Thirty or forty years ago the codes were very crude and simple. You could simulate the keel and sails, just like you would an airfoil, in steady state with simplifications.”

As simulation complexity increases, so does the reliance on a higher class of hardware, offering much more capacity than personal workstations.

“In the last 10 years, the trend has been to use large compute power and study the simulation results as responses surfaces. You look at the parametric shape changes in the design space, study them statistically to see how they work together and figure out which combination works best. You can only do that for complex CFD problems with large-scale computing,” says Stewart.

“If you are simulating a small powerboat, the domain you are solving is quite small, but when you are solving for a sailing boat, where the wind really matters, you have a massive domain to solve. The atmospheric wind matters quite a lot and solving and understanding how we can best get thrust from that, needs a lot of cells. Then on top of that, you also have the water interface that you need to solve,” says Max Starr, CFD engineer for INEOS TEAM UK, a contender in the 36th America’s Cup. INEOS TEAM UK gets support from Siemens Digital Industries Software with the company’s design, data management and simulation software.

“It would have been a lot more difficult 20 years ago if we had the same rules now,” says Starr. “We can have a lot more faith in the computational models now than we could have had 20 years ago.”

“Virtual prototyping has become the way to get an advantage on the competitors and perfect the design,” notes Mark Fischer, director of product management at PTC. “HPC (high-performance computing) plays a huge role. Aside from the cluster, a competing team might have at its disposal, other cloud resources and on-demand services, like those from our partners Microsoft and AWS, [that] play an important role. They were not as abundantly available as they are now.” 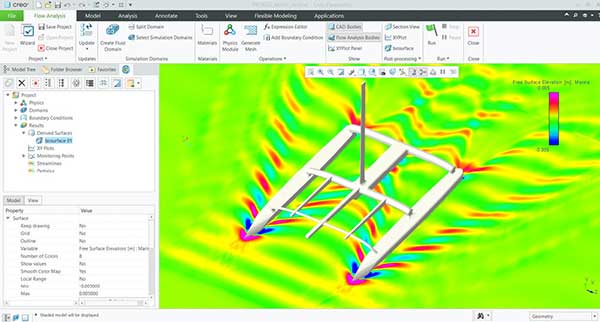 “You definitely need HPC, whether cloud services or in-house. Nimbix is the Official Compute Partner to the U.S. Sailing Team and we rely on their cloud-based computational power. I think most America’s Cup teams have in-house HPC clusters,” he remarks.

GPU’s Role in the Race

Traditional CFD is done with Navier-Stokes methods or even panel codes, typically on CPUs, according to Stewart. But the development of the Lattice Boltzmann method opened new possibilities. It was a method particularly effective with distributed computing or clusters.

“The Lattice Boltzmann code is compute-intensive, because it works out changes in very fine voxel spaces at every time step, so it takes a lot of memory,” says Stewart. “When you apply GPUs (graphics processing units) to it, it allows you to tackle large problems.”

“Ansys Fluent runs up to 3.7X faster on GPUs, dramatically reducing time to solution from weeks to days,” NVIDIA states.

However, not all simulation tasks can benefit equally from the GPU.

“CFD codes do not scale very well on GPUs, especially when you are simulating both water and air,” says Starr. Starr and his colleagues from INEOS TEAM UK use Siemens’ Simcenter STAR-CCM+ software for CFD.

No Free Lunch in the Virtual World

Virtual tests and simulation cost much less than building physical mockups and conducting tank testing, but the process still exacts a toll—in time and computing cycles.

“The whole setup involves taking the CAD model of your design idea, to creating a surface mesh, and then the volume mesh around that [to represent the air and water interacting with the boat]—that’s just preprocessing. Then you have the simulation itself,” explains Stewart.

“In comparison, it might take 6 to 12 hours to run a 2-second simulation for a full car. The transient simulation of the flow fields for a 2-second event can produce half a terabyte of data. If you do 10 or 20 runs [for design variations], having the compute power to consume that much data is important,” Stewart says.

“When we use CFD in the America’s Cup, although we do have a lot of repetitive simulations, there are a lot of one-off simulation studies as well. Especially now, with this unique and new class of boat, we are still trying to understand that as well. That means there are a lot of one-off what-if studies that we will do. You do want to have a standard library of simulations just to churn through different designs and different scenarios,” he adds.

Hanna, the author of the paper “CFD in Sport” (ISEA), points out that in 2012, CFD for yacht design had improved to allow “Full 3D models, HPC, supercomputers, moving hybrid mesh, overtaking, free surface, [results] in days.”

That’s much better than the weeks it took in the 1990s to get the results, but with the clock ticking away before the race, the number of days available to explore different ideas, commit to a specific concept, then manufacture the boat, is finite.

How Simulation Impacts Innovation in Design
Simulation brings many benefits to design engineering—but it’s not a one-size-fits-all option for certain use cases.
Transporting PLM to the Cloud
Cloud-based PLM can provide the flexibility and accessibility needed for digital transformation.
PTC and Volvo Group Form Digital Engineering Collaboration
Volvo Group’s use of PTC technologies to establish a digital thread of connected data to drive productivity across all levels of the organization, companies report.
Digital Thread Accelerates Connected Car Development
Digital transformation of the automobile will require a new design approach.
Matterport and PTC Open up Ability to Create AR Experiences for Large Spaces
Customers can now enrich digital twins captured with the Matterport platform with interactive AR experiences called Area Targets.
PTC Company Profile