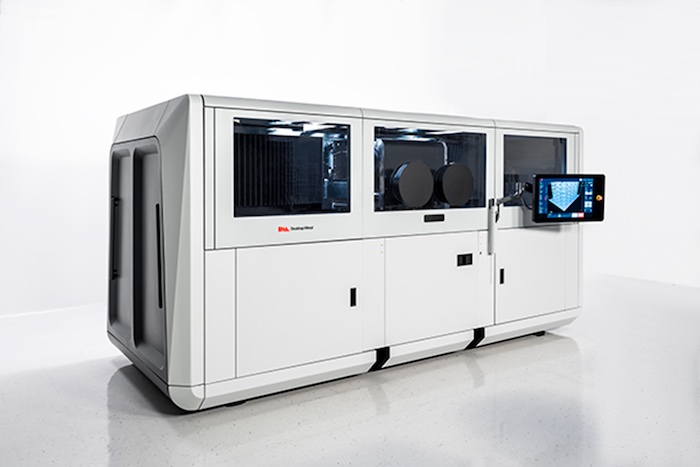 Save Time and Reduce Costs with NoSupports™ Metal Printing
Metal 3D printing is a high energy process in which it is possible for unmanaged...

Buoyed by a $100 million R&D investment and a four-year development cycle, Desktop Metal’s AM moonshot is now a reality as the company took the wraps off the commercial version of its flagship Production System and revealed its first named customer—power tool giant Stanley Black & Decker.

The concept version of the Production System printer launched in April 2017, designed and created by the inventors of binder jetting and single-pass inkjet technologies who were looking for a breakthrough to 3D print metal parts at scale. While metal AM printing has been around since the early 2000s, the technology struggles with limited adoption primary because the cost-per-part ratio has remained too high for most industries outside of aerospace and medical devices, according to Jonah Myerberg, Desktop Metal’s co-founder and CTO.

Most of the metal 3D printer manufacturers catering to these sectors have settled on laser-based processes and addressed the scalability conundrum by adding more lasers to their printer models, Myerberg says. “The whole process of melting material voxel by voxel and building up a part through the scanning process was qualified early on so when the vendors went to scale the systems, they didn’t fundamentally change the process, they just added more lasers to the printers,” he contends. “That’s fine for industries that can afford it, but it makes the printers very complicated and expensive because they have to duplicate the entire overhead of the system over and over to make it go faster.”

While that approach can deliver performance boosts, it’s not enough to get the 10X or even 100X type of improvements required to make the case for metal 3D printing of production parts, Myerberg says. That’s where Desktop Metal focused, creating its patent-pending Single Pass Jetting technology that with bi-directional printing, can achieve print speeds up to 12,000 cc an hour, producing parts at costs competitive with conventional mass production processes. The printer boasts a native resolution of 1200x1200 dpi and layer heights as small as 50 µm, resulting in finished parts with excellent surface finish and fine features.

With properties similar to casting, Desktop Metal maintains Production System P-50 produced parts are suitable for applications where strength is critical. The company is building a case for manufacturers to incorporate metal AM into their production plans as a way to de-risk their supply chains, compress time-to-market schedules, lower costs, and streamline inventory. “We think of it as AM 2.0—the next generation of 3D printing applied to mass production,” Myerberg says.

Stanley Black & Decker has been leveraging Desktop Metal printers, including the prior lab version of the Production System, for prototyping and for production of low-volume parts, including fixtures, tooling, and jigs, he says. Like many other companies, they’ve been waiting for the metal 3D printing sector to resolve the cost-per-part problem before diving too deep into full-scale parts production.

“This is another tool in their bag now,” Myerberg says. “We’ve been working with them for many years to understand what would be a good fit in 3D printing for them.”

For a look at the commercial Production System P-50, check out this video.