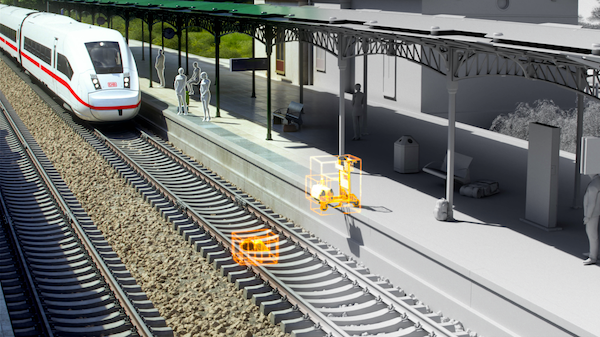 When it comes to large digital twins, we have seen examples of factory-scale models and even projects that involve creating digital twins of cities. But German railway operator Deutsche Bahn has launched a digital twin project with an even more massive scope—the organization plans to build a country-scale digital twin of its entire rail network, encompassing 5,700 stations and 33,000 kilometers of track.

The digital twin, created with NVIDIA Omniverse Enterprise, will leverage artificial intelligence (AI) to help Digitale Schiene Deutschland (DSD, part of Deutsche Bahn) create a perception and incident prevention and management system that will detect and react to irregularities during rail operation, and optimize response and rescheduling operations.

The company presented a demonstration of the technology at the recent NVIDIA GTC conference.

“With NVIDIA technologies, we’re able to begin realizing the vision of a fully automated train network,” said Ruben Schilling, who leads the perception group at DB Netz, part of Deutsche Bahn. According to Schilling, the future railway system will improve the capacity, quality and efficiency of the network.

Deutsche Bahn will use Omniverse to create a photorealistic and physically accurate emulation of the entire rail system, including tracks running through cities and countrysides, and details from sources such as station platform measurements and vehicle sensors.

According to Mike Geyer, Omniverse Product Manager at NVIDIA, Deutsche Bahn will use geospatial tiling to build out the landscape in this massive digital twin. “They will use 5G wireless communication, a sensor network and edge devices, so they can identify anomalies over time and help better coordinate rail operations. Omniverse combines and aggregates all of the data they are collecting, and the resultant digital twin will be used to train their AI network.”

Deutsche Bahn first began publicly discussing its plans for digital twin technology in 2020. Last year, the company announced it was working with train manufacturer Stadler to develop a virtual image of a complete train. The company also invested 15 million euros in a smart sensor technology project, called Sensors4Rail, to help monitor and optimize its operations, as well as leveraging HD mapping technology from HERE Technologies and LiDAR-base data to map objects along its routes. The company is also working with AP Sensing to gather live data along its tracks.

You can read more about the Deutsche Bahn vision for digital twins here.

The company will use Omniverse to connect computer-aided design datasets that have been built within the Siemens JT ecosystem with its HD 3D maps and simulation solutions. All of these data sources can be combined into a single virtual model in Omniverse.

Once the full-scale digital twin of the network is built, Deutsche Bahn will be able to run optimization tests, validate network changes, run simulations, and train the AI system that will help automate responses and rescheduling.

“If there is an obstacle on the track, rather than making a phone call to someone who will have to then re-route multiple trains, the technology on the trains will see that obstacle and then alert other trains that they need to alter their routes,” Geyer says. “That is the level of automation they are aiming to ultimately achieve.”

You can learn more about the project in this NVIDIA blog.

Looking to get started with digital twins? See a simple five-step roadmap to set yourself and your organization up for success.