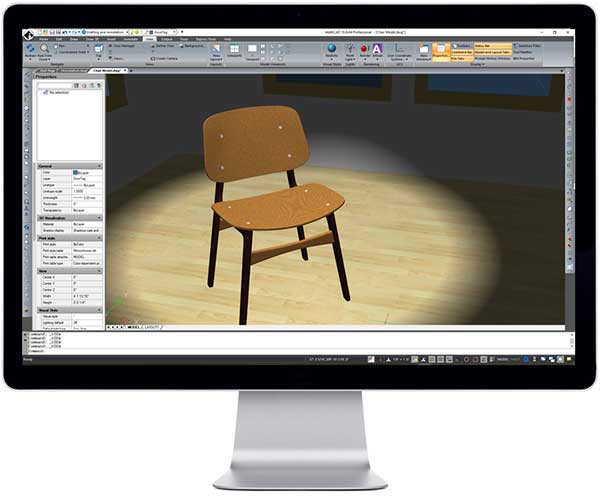 IntelliCAD is a standalone drafting solution that is also used as the foundation for CAD products from several vendors. ITC is a founding member of the Open Design Alliance, and uses ODA solutions extensively in the CAD product.

New in Release 10 is support for OpenGL ES, a new graphics device that provides IntelliCAD with the ability to offer enhanced performance and new visual features. There is now a materials library which contains materials that can be assigned to entities and layers and then displayed with visual styles. There are also spot and point lights that can display in-program with visual styles.

The redesigned View Manager has more options available and allows users to make selections dynamically for the view’s background, perspective, lens length, and more. Related is new dynamic input, which incorporates command prompts and measurement guides at the cursor.

Printing with .pc3 customization files is enhanced with the ability to set margins, page size, .pmp files, and settings that vary according to the output file type.

Smaller features that will have a big efficiency boost for end-users are the ability to re-order and sort layer filters; combine paragraphs and clear formatting of multiline text; determine which user interface items are hidden when cleaning the screen, use new videos and online resources from the Start page; convert closed entities to solids; specify a layer state for each published sheet; a redesigned status bar, enhancements for Section 508 usability; better 4K display support; and an initial Hungarian translation.

For versions of IntelliCAD that work with BIM files, draw roofs and beams, create mitered joints for beams, explode attached BIM underlays into polyface meshes and polylines that can be edited while retaining underlay functionality, and use new options for section lines and elevation lines.

For versions of IntelliCAD that open, save, and edit .DGN files in their native format, the supported command set now includes Multiline Text, Chamfer and Dimension Styles.

Other improvements and fixes are found in performance, working with files, editing and selecting entities, text, printing and more.

“IntelliCAD 10 is a huge structural update with new core libraries from the ODA, a new geometry library, updated graphics, and new APIs,” says David Lorenzo, ITC president. “Yes, there are several interesting new features for users too, but the structural changes provide a much stronger foundation on which ITC members can build even more complex and diverse applications.”

An overview video of IntelliCAD 10.0 features is on YouTube here.

To learn more about the IntelliCAD Technology Consortium, click here.