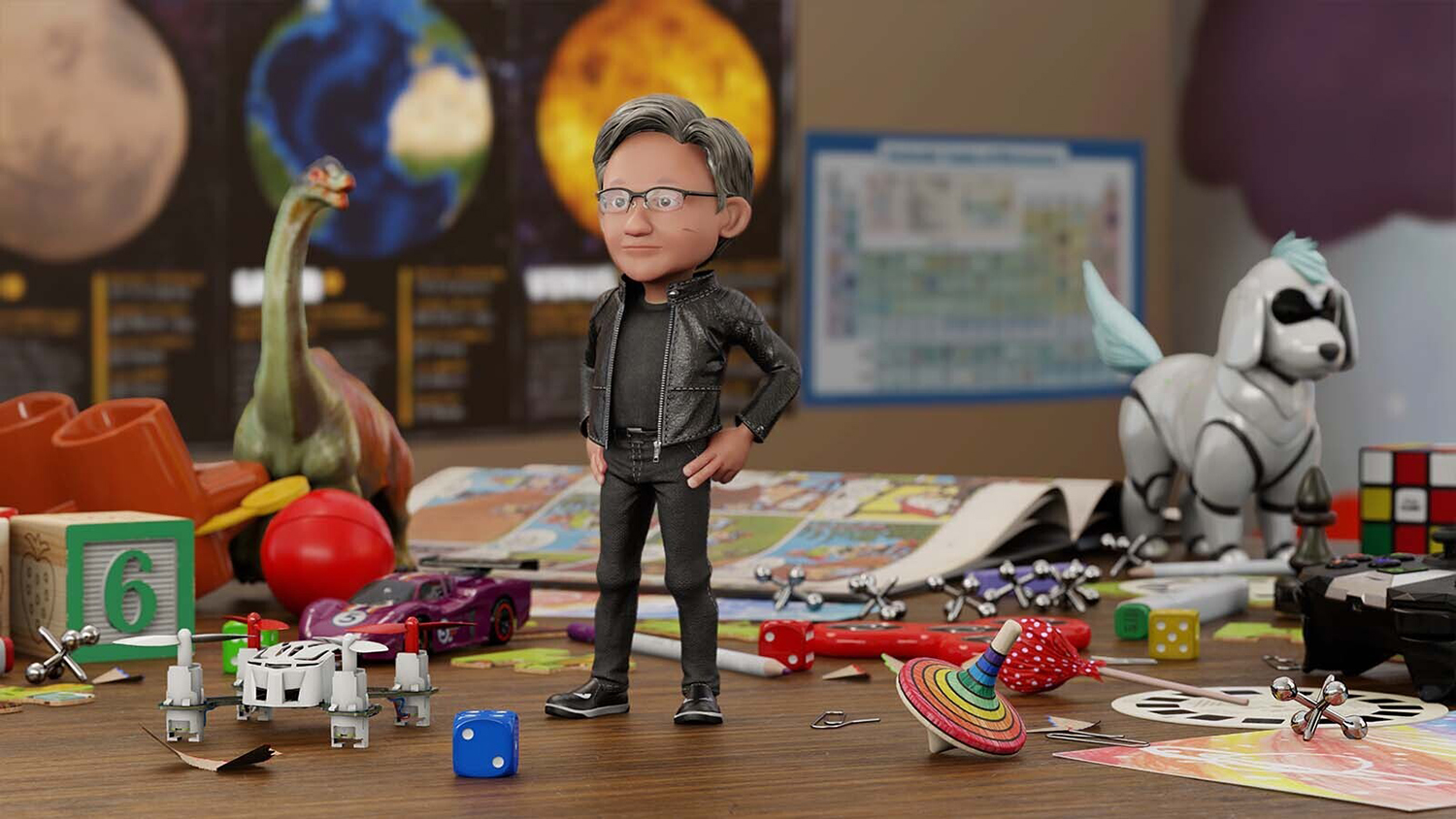 GTC Fall 2021: Omniverse Emerges as Home of the Digital Twins

If talks of GTC this week gives you a sense of déjà vu, you're not crazy. This year, as the annual in-person GPU Technology Conference switched to virtual format under the lingering threats of COVID-19, it also doubled, quite literally. It was split into GTC Spring (held in April) and GTC Fall (this week), occuring twice instead of once.

In the Fall Edition of GTC, NVIDIA CEO Jensen (Jen-Hsun) Huang appeared not only as himself but also as a digital twin—a much smaller version of the man constructed in pixels, but still donning his trademark leather jacket. The AI-powered Toy Jensen responded to three human experts' questions on the greatest threats of climate change, the methods to find exoplanets, and the role of proteins in human cells.

This may seem like a gimmick, but not quite. It's a demonstration of how AI-powered avatars might give digital twins personalities. The technology behind it, is the GPU-accelerated AI SDK called Maxine. “The new Maxine connects computer vision, reverse speech, AI, and the avatar, animation and graphics into a real-time conversational robot. Our Metropolis engineers use Maxine to create Tokkio, a talking kiosk ... we've been building speech synthesis with my own voice a conversational AI Toy me,” explained Jensen in his keynote at GTC Fall.

At GTC 2019, Jensen introduced Omniverse as “an open collaboration tool. It works with all major 3D tools.” But over time, his vision expanded. By this April, Omniverse was in Beta. This week, Jensen revealed Omniverse is open for business. “Omniverse is where we will design, train, and continuously monitor the factories, buildings, warehouses, and cars of the future,” he said.

So how much will it cost to put your digital twins on the Omniverse? NVIDIA announced subscription for Omniverse Enterprise begins at $9,000 per year.

#NVIDIAOmniverse Avatar, a technology platform to develop interactive #AI avatars that respond to speech and facial cues, can understand multiple languages, and are able to make smart recommendations was just unveiled at #GTC21.

As home of the digital twins, NVIDIA's Omniverse faces stiff competition. About 20 minutes' drive away from NVIDIA's headquarter in Santa Clara, engineers are also working on a metaverse, conceived by what used to be Facebook but is now called Meta. For its vision, Meta has picked a chip maker for a partner—NVIDIA's rival AMD. (”AMD shares close up 10% after company wins Meta partnership, announces new chips,” November 8, 2021.)

Microsoft also hopes to lure digital twins into its own metaverse. At its developer conference Ignite 2021, Sataya Nadella, Chairman and CEO of Microsoft, said, “As the digital world and physical world come together, we are creating an entirely new layer, which is the metaverse ... It's no longer just looking at the factory floor. You can be on the floor.”

For microprocessor makers like NVIDIA, AMD, and Intel, the metaverses—interconnected virtual universes with immersive visuals—are opportunities to massively increase sales of GPUs and CPUs. For Microsoft, they are new sales for cloud services, powered by high performance computing servers, powered by microprocessors. Going forward, we can expect more partnerships among the chip makers, cloud providers, and metaverse operators, all competing and cooperating at times to attract herds of expensive digital twins from large enterprises.

The metaverse is here, and it’s not only transforming how we see the world but how we participate in it – from the factory floor to the meeting room. Take a look. pic.twitter.com/h5tsdYMXRD

Who's in the Omniverse?

A few digital twins associated with household brands in tech and engineering have already taken up residence in NVIDIA's Omniverse. Even in its Beta phase, telecom service provider Ericsson was using it to build digital versions of real cities to analyze and optimize its 5G coverage. Car maker BMW was using it to simulate and improve its factory operations. In this week's GTC keynote, the spotlight fell on more users.

“Using the real-time, multi-GPU scalable simulation platform, Lockheed Martin creates visualizations of the predicted fire movements and studies their flow dynamics across a digital replica of the landscape. This enables its team to utilize NVIDIA Omniverse in multiple areas,” wrote NVIDIA blogger Anthony Robbins. Siemens Energy is also using Omniverse to build digital versions of its Heat Recovery Steam Generators to predict corrosions, as shown in this video.

Object behaviors in Omniverse are driven by PhysX, NVIDIA's physics engine and SDK. It enables simulating rigid body movements, robotic systems, structural deformation, fluid dynamics, particles, and smoke, among others. They won't replace the standard finite element analysis (FEA) solvers used by engineers. Rather, Omniverse might incorporate them, according to Rev Lebaredian, VP of Simulation at NVIDIA.

“Omniverse will connect all these together to create something better than its parts. We want to take all these capabilities, combine them to do things that are previously impossible,” he said in a press briefing.

Omniverse uses the Pixar-developed Universal Scene Description (USD) language to depict 3D data. CAD developers can enable data exchange between their products and Omniverse via connectors. The assembly importer for Onshape, the cloud-hosted CAD program from PTC, paves the way for other packages to take a similar approach. 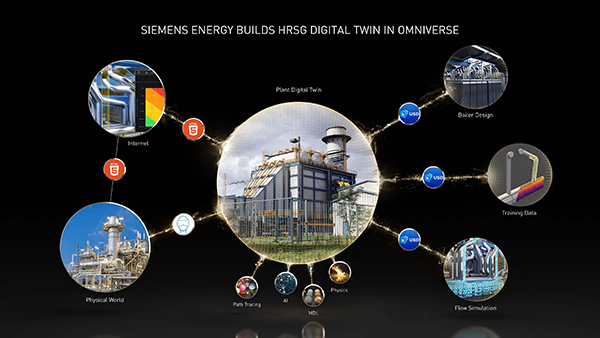 In 2006, NVIDIA unveiled its CUDA architecture, setting the groundwork for GPU acceleration of workloads typically performed by the CPU. Adoption of the CUDA programming environment led to speed up in simulation and rendering, which in turn encourages more software developers to rework the code to harvest the GPU's processing power.

In 1993, when Jensen founded NVIDIA, the company was conceived as gaming hardware maker, aiming to make the explosions, reflections, and movements in PC games more realistic. Neary three decades later, NVIDIA is edging closer toward scientific computing, high performance computing, autonomous vehicles, and machine learning. The tagline for GTC is “the Number One Online AI Conference.”

Inside Omniverse, traces of NVIDIA's origin in games still remain, in its uncompromising ray-traced graphics and ultra-realistic visuals. Here, the lines between work and play are further blurred, and the digital and the physical begin to merge.