Environmental Benefits and Bottlenecks in Metal AM

Material specialist ATI points to recyclable materials as key to sustainability, new-part qualification as a bottleneck

Material specialist ATI points to recyclable materials as key to sustainability, new-part qualification as the bottleneck

In 2016, Simon Ford and Melanie Despeisse from the Centre for Technology Management, Institute for Manufacturing, University of Cambridge, published an article titled “Additive manufacturing and sustainability: an exploratory study of the advantages and challenges” in the Journal of Cleaner Production at Science Direct.

In it, the authors point out, “Additive manufacturing mimics biological processes by creating products layer-by-layer. It is inherently less wasteful than traditional subtractive methods of production and holds the potential to decouple social and economic value creation from the environmental impact of business activities.”

In the same post, Bill Peter, director of DOE’s Manufacturing Demonstration Facility located at ORNL, said, “The average yield for a titanium component on an aircraft [made using traditional methods] is 10%. For every 10LBs of incoming titanium material, 9LBs are removed, and 1LB ends up in the final component.”

While AM tends to be greener in comparison to traditional manufacturing, “There are rooms for improvement, for example, in the recycling of some consumables used in the process, like the filters,” said Richard Merlino, senior director of additive manufacturing (AM) at the material specialist ATI.

“We did lots of research to understand how we can reuse or recycle powder metal in AM. At some point when the material degrades, it requires proper handling,” said Brian Morrison, director of AM at ATI.

Growing Interest in Metal AM

Early 3D printers used plastic-based materials to build parts, which have questionable environmental impacts. “Only a handful of plastics are recycled via traditional municipal waste streams, so even if a part is recyclable, it does not guarantee that it will be recycled. Consideration needs to be given to the entire workflow of recycling, including collection, sorting and processing,” says Jason Rolland, vice president of Materials at Carbon. (For more, read “Is Large-Scale 3D Printing Sustainable?” December 2018)

One of the earliest 3D printer using metal carbon fiber was Markforged's Mark One, premiered at SolidWorks World 2014. Since then, interest in metal AM has grown. In February, Markforged announced its plan to go public.

This April, European AM system maker BEAMIT announced that it has developed an AM process for Titanium alloy, called Ti6242. In the same month, AM software maker Materialise announced it has “opened its new 3,500 square meter Metal Competence Center for 3D Printing in Bremen, Germany.”

“Now that more aerospace companies have decided to go forward with using AM for production, the quality aspect of the equipment has to improve,” said Merlino. “There needs to be more onboard diagnostic tools to monitor things like laser power, laser speed.” 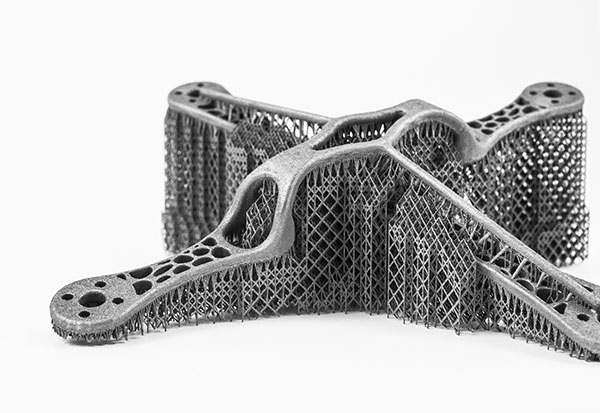 A 3D-printed part with support structures, designed in Materialise software, made in collaboration with volum-e. To increase the efficiency of complex metal production, volum-e tried the software Materialise e-Stage for Metal, which automatically generates the needed support. Image courtesy of Materialise.

For newcomers to AM, a lack fo understanding of the process appears to be the barrier. “AM gives you a lot more freedom [in geometry] than what traditional CAD packages allow you to design,” said Merlino. “We get to teach [customers] how to unleash the full capability of AM by designing a better part.”

For design projects destined for AM production, more and more engineers now rely on topology optimization software, which proposes best (or optimal) shapes based on input parameters (such as stress loads and the desired safety factor). “In topology optimization software, there are lots of assumptions made about the underlying material, like its strength,” noted Merlino. He said ATI has considered partnering with simulation software companies to improve the software's material databases, but “the software isn’t complex enough to handle the data,” he added.

Speed is Not the Bottleneck

With traditional manufacturing, investment in tooling is the upfront cost, but once in place, volume production can commence at high speed. With AM, the speed with which individual pieces are produced in the build chamber can test your patience.

“Some 3D printers have improved. They've gone from really slow to slow,” quipped Merlino. “But we're seeing improvements. The dollar-per-cubic-centimeter ratio in AM fabrication is getting better. But I don't think 3D printers need to operate at a breakneck speed.”

In aerospace, qualifying and certifying never-before-used 3D-printed parts take time; therefore, the machine's production speed may be less relevant, at least for now.

“It takes along time, specification in aero and defense, due to a lack of knowledge in the regulatory bodies,” said Merlino. The more safety-critical a part, the longer it takes. While an airline seat's armrest, for example, might be certified in weeks or months, a 3D-printed engine component could take years of expensive physical tests and reviews before it's allowed to be put into service.

In the article titled “Impact Assessment of Additive Manufacturing on Sustainable Business Models in Industry 4.0 Context” published to the open-access scholarly article portal MDPI, authors Radu Godina, Ines Ribeiro et. al. write, “The existing additive manufacturing technologies are still slow, ineffective, and cost per part too high to compete with traditional methods. However, additive manufacturing has a very ambitious projection in the future and many efforts are made in different directions to turn additive manufacturing economically, socially and environmentally viable.”