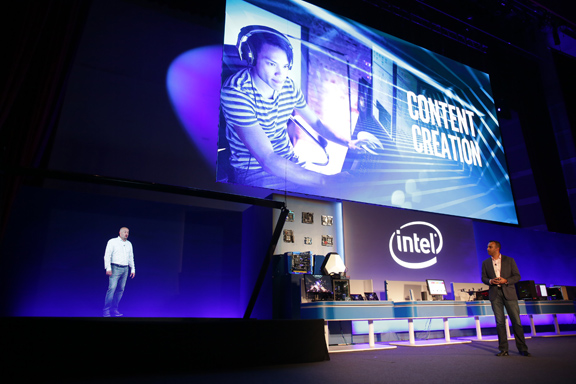 Better Community Relations With Quieter Aircrafts
Aviation industry growth is resulting in increased aircraft noise near airports, and these communities are...
Design Resources

The opening act for Intel’s keynote at this year’s Computex (Taipei, Taiwan, May 31-June 4) was a virtuoso Wushu artist’s martial arts sequence, augmented with the digital rings she wore. The gadgets dramatized her graceful thrusts, kicks, and cuts with digital clouds and smokes corresponding to the velocity and vector of her movements. This was perhaps a gesture to suggest the CPU maker is charging into the world of connected devices, virtual reality (VR), and augmented reality (AR).

Navin Shenoy, Intel’s corporate VP and GM for the Client Computing Group (CCG), praised the Wushu act as “an amazing example of the intersection of art and technology.”

As the leading chip maker, Intel has a vested interest in making its processors the center of this cycle. The company highlighted two star products at the show:

The Intel Core i line has been the standard for gaming and consumer applications. With the Core i7 Extreme Edition, Intel pushes it toward cutting-edge games featuring VR. The company writes, “The Intel Core i7 processor Extreme Edition delivers a fantastic experience with Oculus Rift and HTC Vive, with more than enough room to spare. So whether gaming or creating in VR environments, gamers and enthusiasts can count on the most vivid, immersive or realistic experiences possible now—and be ready for what’s to come.” (”Our Most Powerful Desktop Processor Yet,” Gregory Bryant, Intel, May 30, 2016)

Citrix XenServer 7.0 will now support Intel Graphics Virtualization Technology. In workstation virtualization, this will allow administrators to assign one processor to one user (a setup preferred by professional engineering software users); or one processor to up to seven users (a cost-effective way to share computing resources by light to medium users).

For a long time, Intel CPUs are synonymous with the PC industry. But the rise of mobile devices and cloud-hosted apps indicates the PC must evolve, or risk becoming irreverent. In a blog post, Shenoy writes, “As an industry, we must and will move beyond the device we know today to completely new kinds of PCs. Imagine a PC that is truly immersive, assistive, with an incredibly natural interface tailored for your individual needs.”

It’s difficult to tell what such a PC would look like, but Shenoy and his colleagues at Intel seem to believe the PC can survive its contest with tablets—perhaps even thrive. He thinks the new PC will prove to be “the ultimate Darwinian device.”

NVIDIA, Intel’s counterpart in the GPU market, is also venturing into VR, AR, and AI markets. Both see the compute-intensive workloads in these sectors as opportunities to pitch their datacenter products. For more, read “NVIDIA GTC 2016: The GPU Wants to Accelerate VR, AI, and Big Data Analysis,” April 2016.