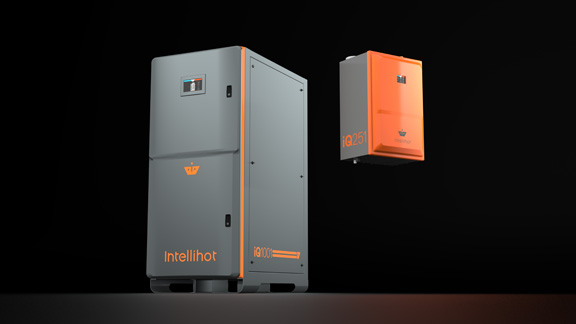 Intellihot reengineers the classic round-the-clock water heater into a tank-less system that heats water on demand. Intellihot CEO XX is a presenter at IoT World 2018 (image courtesy of Intellihot).

IoT products may be associated with young, hip, tech-savvy consumers, but it’s the traditional manufacturers and blue chip companies that are now wrestling to lead it.

At the IoT World 2018 conference (Santa Clara, May 15-17), the crowd is not just hackers and programmers in skinny jeans and black t-shirts but also C-level corporate types in suits and starched collars.

Among the keynote speakers are household names like GE, Krogers, Boeing, and UPS. And the tech vendors servicing the industry titans range from SAP and Amazon to Google.

For many traditional manufacturers and enterprises operating century-old equipment and infrastructures, migrating to IoT means, retrofitting—placing sensors on the hardware to collect a steady stream of intelligence, remotely accessible from mobile apps. Consequently, the app-enabling middleware vendors have become a critical piece of their transformation.

Intellihot reengineers the classic round-the-clock water heater into a tank-less system that heats water on demand. Intellihot cofounder and CEO Sridhar Deivasigamani is a presenter at IoT World 2018 (image courtesy of Intellihot).

For example, when the beer volume gets below a certain level, the dispensing system can automatically trigger a reorder, taking into account how long it will take the supply to arrive. Thus, as far as the bar patron is concerned, the beer never runs out.

A few feet away, Losant, an enterprise IOT platform provider, demonstrated its capacity with an augmented reality (AR) demo app that gives insights into the operating conditions of an engine block.

“We provide an Edge Agent [a component that processes data at the site], fairly affordably and easy to install,” said Brandon Cannaday, cofounder and chief product officer of Losant. “The information it reads can be recorded up in the cloud, part of our application enablement platform called Losant. The platform provides a suite of visualization services and drag-and-drop workflow engine for alerts and notices.”

For those pursuing digital twin strategies, platforms like Losant may be the bridge to connect the real-time data from the products and equipment in the field to the PLM systems, or to add a layer of performance and historical data to the 3D digital replicas.

“The first step is to visualize the data,” said Cannaday. “Next, you might want to process the data with some simple heuristics, to look at the values beyond your warning thresholds. After a while, when you collected enough historical data to see patterns for pending failures, then you can move into machine learning and predictive analytics.” Losant partners with Google Cloud to provide machine learning tools and functions, Cannaday added.

For Losant, the beginning of IoT is data visualization (image courtesy of Losant).

Most people, upon returning home to discover their basement flooded from a leak in the water tank, would probably let out a few angry curses and call up a cleaning company. But not Sridhar Deivasigamani. A mechanical engineer who have dabbled in robotics and marine engines, Deivasigamani decided to seek revenge by designing a water heating system that doesn’t require storage tanks. That was the birth was Intellihot, based in the small town of Galesburg, Illinois.

“The HVAC (heating, ventilation, air condition) industry is very traditional. People in it are heating water exactly they did a hundred years ago,” said Vikas Chopra, Intellihot’s director of marketing. “Basically, the systems boil water to keep it heated 24/7, just in case someone might want a hot shower.” Deivasigamani, founder and CEO of Intellihot, has compared the inefficiency of this approach to “leaving your car idling in the driveway just because you need to drive to work the next day.”

Conversely, Intellihot has come up with a system that heats water only when it’s demanded. “At the heart of our heat engine is a single finned stainless coil that is designed to float freely,” Intellihot explains in its website. “This unique feature allows for rapid thermal cycles by allowing the coil to expand or contract. Cold water enters the coil at the bottom, and is carefully heated to the correct temperature before emerging at the top, ready for use.”

If you have ever stayed at the AC Hotel (run by Marriott) in Portland, Oregon, the Hilton Garden in Port Washington, New York, or the Bayfront Hilton by the San Francisco Airport, you have benefited from Intellihot. The company’s systems are also installed at the Levi Stadium in Santa Clara, across the street from the convention center hosting IoT World; a sushi restaurant in Southern California; and the Baltimore VA Medical Center.

“Our customers typically see their energy bills go down over time,” noted Chopras. “It’s not because they’re using less water, but our systems are getting smarter at identifying the needs and trends. They’re not wasting energy to heat water all day long.”

Watch the Past, Predict the Future

The company has also launched a mobile app called telliZero, to help users monitor and analyze water usage over time. It works in conjunction with the telliBot, an IoT- and WiFi-enabled, smart condensate neutralizer. The combined use of the app and the hardware lets users monitor water temperature, detect leakages, and corrosion damages, among others.

Furthermore, with the telliBot Predictive Analytics Service, the company says, “We monitor the supply/return temperatures of any water heater or boiler, and send alerts for any out of range activity. In addition, we predict the health of your unit based on historical performance ... We monitor for any leaks that might be starting and will alert you if that happens ....”

On May 17, Deivasigamani spoke at the IoT World’s Futurist Stage. His talk was “Smartifying the bonfire in our caves: How AI, robots and sensors will catalyze a waste-free future.”

Summarizing the company history, Intellihot writes, “born of a busted water heater and a soaked basement.”

From Stress and Flow to IoT

Last June, US-based simulation software maker Altair snatched up Carriots, an IoT firm based in Madrid, Spain. This year, Altair set up a booth at IoT World, daring conference attendees to push its button—literally. With a bright red button attached to a laptop, Altair demonstrated how, the force with which you push the button could instantly be measured, numerically captured, and displayed on a digital model.

The significance of the gimmick might be lost on some, but for those who work closely with simulation programs, Altair’s demo illustrates the critical link between physical test and digital simulation—a digital simulation is only as accurate as the quality of the real-world forces and loads it employs.

Carriots remains an independent brand in the Altair portfolio. It’s set to compete with other IoT platforms like PTC ThingWorx, the outcome of PTC’s acquisition of ThingWorx in 2013.

In the early days of IoT, the design software makers have had to weather the shifting climate by acquiring or partnering with ECAD (electronic CAD) software makers, a recognition that electrical functions are rapidly replacing the less-efficient mechanical components. Going forward, the integration of apps and data will be the conundrum for the technology providers to solve.