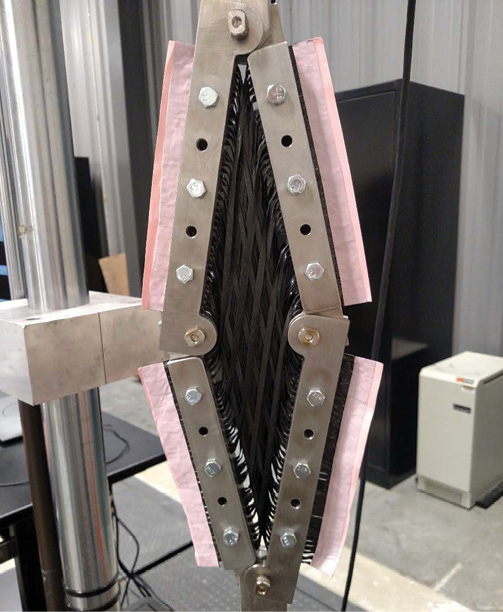 In May 2018, the Institute for Advanced Composites Manufacturing Innovation (IACMI), announced the completion of the first phase of an IACMI project led by DuPont, Fibrtec and Purdue University to create a new carbon fiber composite manufacturing process that would provide better fabric formability characteristics.

The resulting process and the improved simulation models were able to reduce time and material waste as a result. “Carbon fiber is very expensive, and, as such, limiting the amount of waste that goes into the creation of any given part is essential,” says DuPont’s Lee Silverman, who is the project lead. “Traditionally, using woven cloth, you take a rectangular piece and cut the required shapes out of it. You end up throwing away a lot of carbon fiber. This program relies on near-net shaping, where we use a robotic system to only lay down the carbon fiber tow in the shapes required. We eliminate all that wasted material.”

The simulation models developed as part of the project could help bridge what is characterized as a “disconnect” between the design phase and how the part is actually manufactured when it comes to composites, says Michael Bogdanor, director of the Composites Design Studio in the Purdue Composites Manufacturing and Simulation Center. “Designers will design for a perfect part with ideal orientation states,” Bogdanor says. “As you go through the forming process, especially with complex curvatures, the fibers are going to move. There’s going to be shearing and orientation angle changes that happen. That’s not a defect; it’s just the way the geometry behaves.”

At Purdue, Bogdanor says the focus is on manufacturing-informed performance. How does manufacturing affect fiber orientation? That information can be used to optimize the design.

Simulation is increasingly important when considering composite design, but it has only been within the past few years that tools have been available to help with this process. Without the ability to successfully simulate the performance of these composite materials, it can be difficult or impossible for engineers to create accurate performance predictions about part shrink, warp behavior or material strength.

Having the right material properties on hand and successfully using them in a simulation can be challenging, because different companies offer different formulations of these materials. “The challenge comes when the material properties are missing,” says Srikar Vallury, engineering manager at Moldex3D (CoreTech System). “You need to them to be characterized through testing.”

It can also be difficult to move from individual material constituents to composite-level predictions. “If you want to characterize composites at a global level, there are too many variables like fiber orientation, type of resin,” says Flavio Souza, co-founder, president and CTO of MultiMechanics. “The approach we’ve proposed is a bottom-up approach to characterize individual constituents and then make a prediction at the component level to reduce the amount of physical testing required to qualify a composite material.”

“Another challenge for processes like compression molding, is that in reality this is a single-state process in which the material compresses,” Vallury says. “Simulation has to divide this into a two-phase process, where the solid mechanics drive the initial phase, and fluid dynamics drive the second phase.”

Moldex3D addressed this issue through integration with LS-DYNA, where the draping analysis is first conducted via LS-DYNA, and then the integration allows for a streamlined approach to simulating the entire compression molding process. The Moldex3D Multi-component Molding (MCM) module supports the orthotropic material settings of the part insert by reading the draping analysis data from LS-DYNA.

Moldex3D also incorporated a simulated resin transfer modeling process capability in its solution. It is also working on approaches for predicting fiber orientation in long fiber composites or in highly filled systems.

“Fibers have a wide distribution of strength, and the average is not sufficient to capture the physics of the fibers in a material,” Souza says. “How do you characterize the resin? You can find elastic properties for the resin, but those materials are very temperature- and time-dependent.”

In addition, fiber clustering can affect the strength of the composite, as does resin distribution. “Differential temperature across the part or changes in the environment can affect the curing process and the properties of the resin,” Souza says. “That can have a big impact on part failure.”

The IACMI/DuPont project generated a new material using Fibrtec’s flexible coated tow (Fibrflex) with DuPont’s Rapid Fabric Formation (RFF) technology and a proprietary DuPont polyamide resin. The coated tow material is a partially impregnated carbon fiber/polyamide composite tow. The carbon fiber is not fully wetted with the polyamide, so the tow is more flexible than a fully impregnated material. The RFF process allows rapid manufacturing of fabrics with tows in varying orientations without the need to lift the tow during processing.

A comparison between the forming characteristics of the RFF vs. a 2x2 Twill. The RFF shears to conform to the geometry, but this is localized to the regions where the complex geometry exists. The Twill exhibits more widespread shearing behavior coming from wrinkles that form due to the shear locking of the material. Image courtesy of Purdue University.

This approach can help reduce the cost of manufacturing carbon-fiber reinforced polymer (CFRP) composites using a “near net shape process” such as automated fiber placement on a less-expensive carbon fiber/polymer tow-preg, according to IACMI. The coated tows can be easily manipulated, so the material can be more easily draped and conform during molding without shear locking. This could reduce carbon fiber waste by up to 30%, and create fiber preforms that predictably deform during compression. This first “resulted in better than expected outcomes with embodied energy being reduced by more than 40% using this processing scheme,” according to an announcement about the project.

The Purdue team’s contribution was to test the material and create new simulation models that could be used to predict performance. “As we create different geometries of RFF fabric, how does that impact drapability and mechanical performance?” Bogdanor asks. “How does the material behave in the drapability analysis, and how does that validate against the actual manufacturing process?”

At Purdue, Bogdanor says the aim is to leverage simulation tools to anticipate those issues and do so without creating a large number of experimental cases to explore the design space. “As we go through the prototype phase, volume is something we’re working up to, so we want to be able to identify the right targets for manufacturing and set ourselves on the right foot,” he says. “We can use simulation to look at different cases, do sensitivity studies and parametric analysis, and see where we can get the most bang for our buck out of the physical experimental work.”

According to Davies, Purdue helped determine the mechanical properties of the material with different fiber volume fractures. “You can change the amount of resin-to-fiber. As your fiber content goes up and resin goes down, that’s a typically more difficult carbon fiber composite to work with. We characterized the material so we could apply that to the design of parts, and that is what Mike needed to input into the simulation programs,” Davies says.

That process involved creating test panels from the coated tow and RFF fabric and doing mechanical testing, which allowed the team to create the underlying model structure for different unit cells to represent the material system. The first cell was an unconsolidated state where the fabric is formable and drapable to model the shear behavior of the fabric. “Then we compared our RFF structure that doesn’t have interlocking tows to a more traditional interwoven fabric,” Bogdanor says. “We could do studies to show where you get a difference in properties that can be used to inform the draping studies.”

The second cell looked at mechanical properties and the effects of topology on the mechanical behavior.

“We’re using micromechanical modeling and multiscale modeling to create a unit cell structure that hasn’t been explored too much,” Bogdanor says. “If you look at most fabric generation software, they only support interwoven textiles. There’s not a lot of support for structures that aren’t interwoven.”

Purdue was able to use this work and create mesoscale models for investigating different material parameters and how they affect performance. “We’re also looking at the material as it undergoes shearing, and how that can change the structure of the unit cell and mechanical properties,” Bogdanor says. “We can use those models to predict performance.”

With improved composite simulation, engineers can successfully complete more designs with less need for physical model trials. This can accelerate time to market and reduce overall costs to produce a new design or part. Having better simulation tools can also help manufacturers and designers optimize material for specific applications.

The DuPont-led IACMI project has advanced to phase 2, which will involve making an industrially relevant part that would benefit from the new process. The automotive market can benefit from this technology as it reduces cost through reduced scrap and better predictability through the modeling and simulation outcomes.

The impact on mechanical properties is shown as the RFF undergoes shearing, something that can be predicted with simulation and directly applied to part performance prediction and design. The local, as-manufactured material properties can vary quite a bit from the nominal properties. By mapping material properties based on forming-induced fiber orientation, it provides a clearer picture of the way that the part will perform. Image courtesy of Purdue University.

One of simulation’s advantages is understanding where composites add additional savings, and where they do not contribute.

For example, Purdue’s simulation process identified that the initial part the team considered would actually not benefit from the use of carbon fiber instead of aluminum. “Because the part was so thick, it would have been a challenge to process in terms of molding and consolidation,” DuPont’s Silverman says. Therefore, the team has identified alternate components where the true value of the technology can be demonstrated. There are other opportunities to optimize the use of composites, and according to Silverman the team gained a tremendous amount of insight in the first phase. This has allowed them to narrow down the targets to those components with the most impact.

“The real heart of that understanding came out of Purdue doing that simulation work, and understanding the loading cases so that we could get a good design without having to make the part,” Silverman adds. “That’s the benefit I’ve realized out of this program ... the ability to absolutely understand what the part needs to look like and how it will respond before you make it. That saves time and money.”

Fibrtec’s Davies echoes those sentiments about the value of simulation when it comes to composites. “One of the things I’ve learned is how much simulation can help potential customers of ours with these types of materials in the future,” Davies says. “It opened my eyes to how important that piece of the puzzle is, especially if you want to go after high-volume markets like automotive.”