PostProcess has combined information captured in the digital thread during the design and printing stages with the necessary tasks of AM part support-removal and final surface-finishing, improving the entire process. 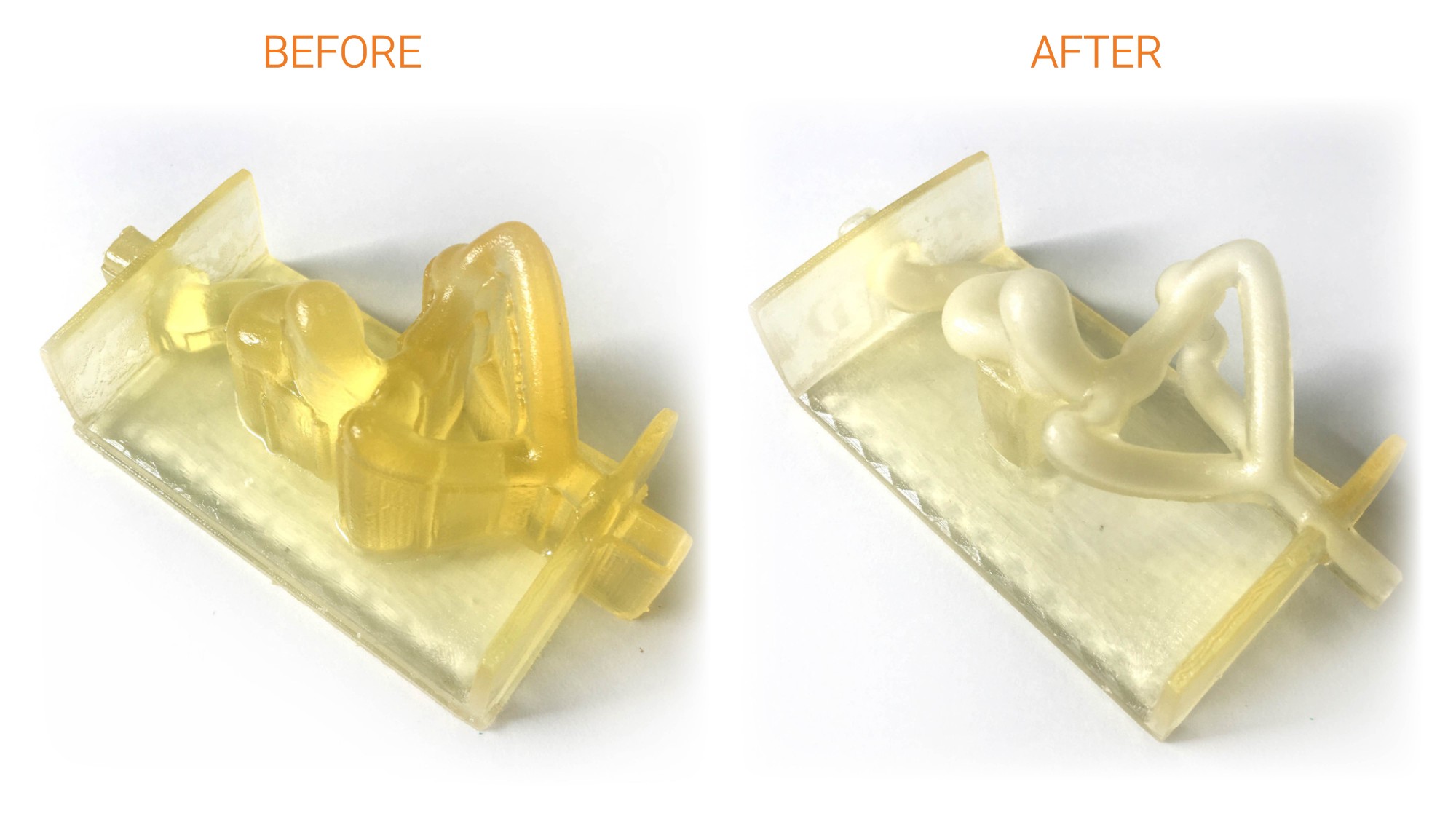 Before and after PostProcess’ automated support-removal of a vascular model. The part was 3D-printed in Vero build material, and 706 support material on a Stratasys PolyJet system.  (Image courtesy PostProcess)

Designing with AM in Mind
Designers and fabricators must support one another to avoid print failure.
Wohlers Associates Identifies Design as Significant Factor in AM Economics and...
Companies with metal and polymer AM services reported that more than 26% of a part’s...
RAPID+TCT 2019 Drives Additive Manufacturing to Next Level in Motor City
Thousands of attendees delve into 3D printing, the future of manufacturing, digital twins, data management...
AMT on the Importance of Automated Post-Processing for Additive Manufacturing
Company to highlight how its BLAST process intersects material science, hardware engineering and process automation...
More Post-Processing and Finishing

Achieving Top Quality and Speed, in Simulation for Crash Test Dummies
Designing occupant friendly interiors that meet requirements in both safety and style, necessitates the extensive...
Post-Processing and Finishing Resources

Adding one plus one and getting a result far greater than two is always a win-win, especially when it improves multiple aspects of a product’s lifecycle. In the realm of additive manufacturing (AM), PostProcess, a New York-based company, has combined information captured in the digital thread during the design and printing stages with the necessary tasks of AM part support-removal and final surface-finishing, improving the entire process exponentially. Both the technical achievement and the story behind it are nothing short of impressive.

For the first few decades of 3D printing, skilled (and patient) technicians manually removed supports and produced sufficiently consistent results. Various follow-on steps, whether performed by hand or on certain machines, yielded final surface smoothness that was good enough. But customer requests and market forces, especially given the goal of fast automated part-production, have pushed the industry to address this post-processing bottleneck.

Eight years ago, one person began a methodical journey to develop an automated, intelligent solution.

PostProcess’ founder and CEO, Daniel Hutchinson – an engineer with mechanical, electrical, computer and business degrees – wanted a better way to remove the supports from his own 3D-printed Ultem (high temperature/high strength) parts. He left his defense industry job to focus on the task, first working as a Stratasys reseller to more deeply learn the nuances of the design/print/post-process stages. Next, he worked as the engineering director for a value-added reseller, taking printers apart and discussing manufacturing challenges with every flavor of AM customer.

Finally, Hutchinson began a classic garage-based business in which he developed the hardware, software and specific chemistry for support-removal equipment and intelligent tumbling systems. By 2014, he had founded PostProcess and began offering the units that can now – just four years later – handle both plastic and metal parts from almost every AM technology.

Jeff Mize, PostProcess CEO, says to date the company has benchmarked half a million parts while developing 16 different systems addressing the full range of design and production applications. Not only does each versatile model handle parts made on FDM, SLA, PolyJet, CLIP and other thermoplastic AM equipment (compared to traditional one-technology-only systems), the recently announced DECI Duo even does automated support removal of plastic and metal parts. So how does this all work?

Current “hands-off” support-removal systems involve submersing the parts in a tub of caustic solution at temperatures up to 180°F. The process can easily take 8 to 16 hours depending on part size and build material, and the PH must be constantly monitored and manually adjusted – sometimes every few hours. Depending on internal geometry, parts also end up “water logged” and need to be left to drain, adding yet more hours to the post-processing schedule.

PostProcess’ series of gentle, submersion support-removal systems, ranging from the 132-cubic-inch desktop Pico model to the 5,832-cubic-inch industrial DEMI, uses ultrasonics, proprietary agitation algorithms and eco-friendly chemistry to provide faster and more precise automatic support-removal. These algorithms control the temperature, timing and agitation frequency based on material-specific, pre-mixed detergents. Even support structures found in complex internal geometry are removed. Technician time is about one minute for loading and touch-screen set-up, and the complete unattended process takes just 1.5 to 4 hours on average.

Before and after PostProcess’ automated support-removal performed on a vascular model. The part was 3D-printed in Vero build material and 706 support material on a Stratasys PolyJet system. Images courtesy PostProcess.

On the larger, industrial models (DEMI and up), the same algorithms are used in conjunction with PostProcess’ AUTOMAT3D control software. This feedback-based system continuously monitors and reacts to key process factors, controlling the energy used and supporting optional custom settings.

Addressing the needs of production-scale AM workflows, PostProcess offers the DECI and BASE models that use spray technology. In a single unit, an automated process removes the supports and rinses off the detergent, all without operator intervention. Part volume for the BASE is a generous 53 inches by 30 inches by 32 inches.

PostProcess has also developed a line of equipment that, along with the company’s proprietary polishing media of different densities and grit, automatically creates the desired surface finish on AM parts to Ra surface-roughness specifications. Depending on the model, either a small circular tub or larger rectangular envelope supports running batches of multiple parts or a few larger parts. A physical divider even allows separate envelopes to run different abrasive and polishing media simultaneously.

Ti64 metal parts (about 4 inches long) done with a two-step process, using the PostProcess Deci Duo for support removal and the Rador for high-shine surface finishing. Ra (roughness average) was reduced from 577 to 98, start to finish. Total process time, running batches of 30 at a time, is 4.5 hours with 5 minutes of technician attendance time for each machine. (Alternatively, the Duo could create a faster but matte finish all in one unit.) Image courtesy PostProcess.

As if these offerings aren’t impressive enough, the new DECI Duo system not only performs support removal and surface finishing in the same unit but handles both plastics and metals. Yes – in one machine. Intelligent planning software controls fluid pressure, air pressure, temperature and timing while matching the chemistry and polishing media to each material. Watch the video below to see.

CONNECT3D Software on the Cloud

Expanding the capabilities of AUTOMAT3D software, PostProcess recently announced its CONNECT3D cloud-based platform. CONNECT3D collects and connects each part’s digital twin information as generated during the design and printing stages. Leveraging geometry details in the native CAD file or 3D-printer sliced files, the software automatically defines the optimized requirements and algorithms ahead of time, for efficient post-process planning.

In the works are efforts toward digitizing and closing the loop on “tribal knowledge,” e.g., how the build-orientation affects down-the-line surface finish. Such fine-tuned information is key to bringing AM technology into Industrie 4.0 connected solutions.