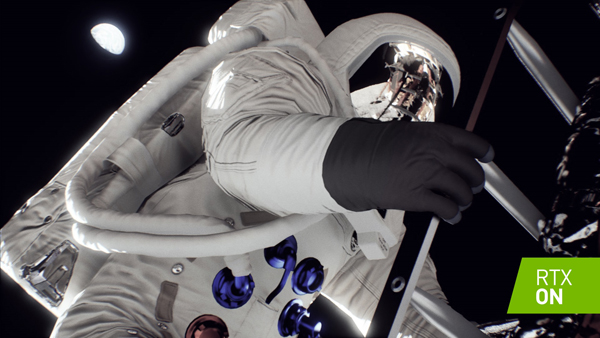 NVIDIA uses RTX GPUs to render the moon landing of the Apollo 11. Image courtesy of NVIDIA.

A few weeks ago at SIGGRAPH 2019, special effects artists, visualization specialists, and digital wizards from near and far converged on Los Angeles, the City of Dreams, to share tips and tricks and find new ways to advance the art and craft of computer graphics.

The event also coincided with the 50th anniversary of the Apollo 11's moon landing in 1969, immortalized by Neil Armstrong's words, “One small step for a man; one giant leap for mankind.” To commemorate the event, GPU maker NVIDIA released newly rendered footage of the moon landing, created with RTX GPUs.

With the perfectly reflected sunrays and casted shadows, the virtual recreation adds details that weren't visible in the original grainy footage, sent back and viewed on TV by millions 50 years ago.

RTX, part of NVIDIA GPUs, is a technology that makes real-time raytracing possible, making rendered images physically accurate. Perhaps more important, it does so with a speed that's near instantaneous, thus enabling designers to visualize their changes on the fly.

“With RTX, each pixel on the screen is generated by tracing, in real time, the path of a beam of light backwards into the camera (your viewing point), picking up details from the objects it interacts with,” wrote Rev Lebaredian, VP of simulation, NVIDIA.“Now RTX real-time ray-tracing capabilities let [the NVIDIA demo team] recreate how the sun’s rays, coming from behind the lander, bounced off the moon’s surface, how these rays interacted with the lunar lander to cast eerie lunar shadows, and even how the light bouncing from the lander and the moon’s surface interacted with the astronaut’s puffy space suits.”

At SIGGRAPH, NVIDIA set up a booth to let attendees become part of the moon landing. Against a backdrop with a mockup space craft, attendees struck up silly and serious poses, which were instantly translated into the posture of an astronaut in a suit via a virtual camera.

“What we're showing is an amazing compilation of AI pose-estimation and real-time raytracing,” said Greg Estes, VP of corporate marketing and developer programs. “We're using new research from NVIDIA that does AI-based pose estimation. We take that information, and then put it into a virtual scene. And we're rendering that scene with the attendee as an astronaut in the lunar landing scenario.”

While the pose estimation by AI involves approximations, it dramatically speeds up a process that usually demands filming actors wearing computer-recognizable motion capture suits. The technology may be applicable in developing affordable ways to conduct ergonomics studies for automotive, aerospace, and manufacturing. 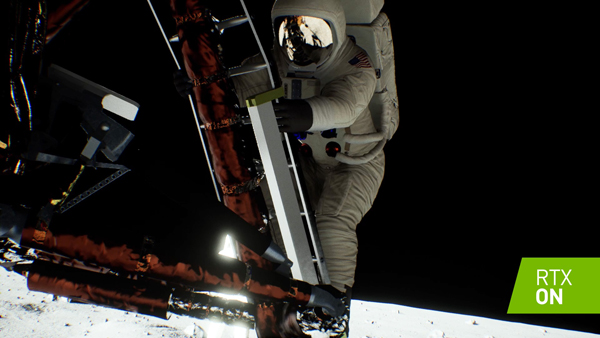 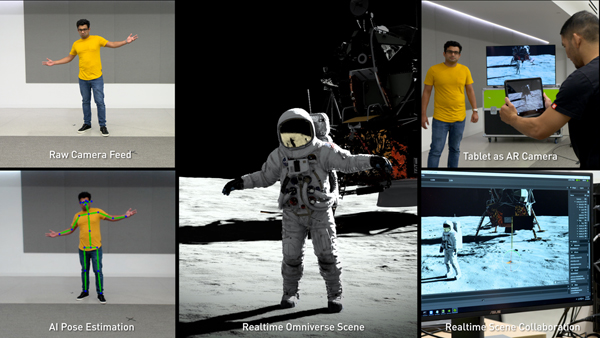 Luxion's CAD-friendly renderer KeyShot has remained exclusively CPU-based since its launch, but this is about to change. Starting with KeyShot 9, to be released in Fall 2019, the program will support GPU rendering, the company announced in the week of SIGGRAPH.

“Luxion has evaluated GPU rendering for several years,” said Henrik Wann Jensen, cofounder and chief scientist at Luxion. “With NVIDIA’s RTX technology, GPU-accelerated hardware raytracing and AI denoising, gigaray performance, GPUs with over 8GB of memory, and the free OptiX SDK, now is the time to do it.”

One of the benefits of RTX—AI-powered denoising or accelerated rendering—will be part of KeyShot 9 when running on the GPU. When rendering on the CPU, the Intel Open Image Denoising steps in to provide similar acceleration.

One of KeyShot's close rivals, the GPU-renderer Bunkspeed SHOT, was acquired by Dassault Systemes and incorporated into its mainstream CAD package SOLIDWORKS. The renderer is now the engine behind SOLIDWORKS Visualize, the CAD modeler's built-in rendering environment. 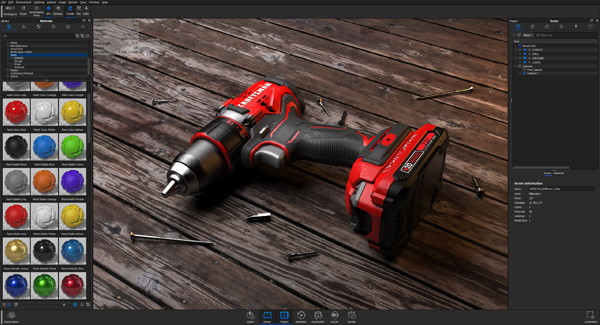 NVIDIA's rival AMD was also at SIGGRAPH, highlighting its free rendering program ProRender. Available as plug-in to many 3D modelers and CAD programs, ProRender is AMD's countermeasure against rendering software that only works with NVIDIA's GPUs.

Without the need for licensing free, ProRender is expected to attract developers who need to integrate a rendering engine into their applications. AMD offers the AMD ProRender Developer Suite for those who want to implement raytraced rendering. It works for CPU, GPU, or hybrid rendering.

With many leading renderers adding or supporting AI-powered denoising, it'll likely become a standard feature in rendering in the near future. In both ProRender and in programs supporting RTX-based denoising, users can turn on or off AI-based denoising, depending on the degree of raytracing accuracy desired.