The Right Choice in GPUs 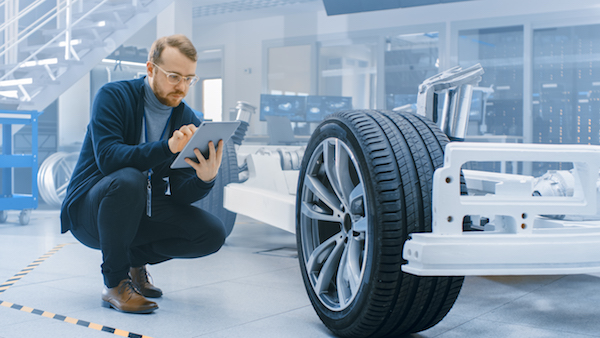 High-Performance Visual Computing in the Data Center Extended to Professionals Everywhere
As the world continues to shift and enterprises across the globe rethink post pandemic infrastructure,...

Demand for graphics processing unit (GPU) power is increasing rapidly. This is particularly true in the design sector, where engineers are taking advantage of the GPU for rendering, visualization, and simulation. Software vendors have incorporated GPU acceleration into their products to help designers increase productivity and optimize their designs.

At the same time, the GPU market is more competitive than ever before, with a variety of faster and more powerful chip options available to end users that are trying to configure an optimal engineering workstation.

The question then becomes: How do you select the GPU with the right balance of capability and cost? The AMD Radeon Pro family of GPUs has emerged as an ideal solution for these demanding workflows, with power efficiencies, reliability, multitasking and performance advantages.

Why choose a Radeon Pro GPU?

Superior Multitasking: Simulation-driven design is placing greater demands on engineering workstations. Engineers need to be able to utilize multiple applications and work on multiple files simultaneously in order to remain productive and efficient. The GPU can provide additional resources when the CPU is being overtaxed by demanding rendering or other activities. In testing, a mid-range Radeon Pro W5500 GPU can provide almost 11 times better application multitasking performance compared to a competitive graphics card. This is a critical element to consider when selecting a GPU. Engineers are taking on more frequent simulation, rendering and visualization tasks on their own workstations as more companies embrace generative design techniques, institute more frequent simulations earlier in the design process, and require engineers to render and test multiple designs and accelerate the entire design lifecycle. Reliable GPU compute power during these workloads is the only way to confidently enable these new processes.

Certified for Success: For designers, a key advantage of the Radeon Pro line is the AMD Day Zero Certification Program. When the GPUs are released, they are already certified and tested for use with a wide variety of software applications that engineers rely on. This helps ensure that users have access to the latest driver benefits, and that they can be productive as soon as they've launched the programs on their workstations.

In addition to power efficiency, Radeon Pro GPUs use a high-performance fan to cool the card, helping protect against failure-inducing hot spots. The GPU was also designed for uniform heat spread. In testing, a Radeon Pro card up to 10% cooler than an equivalent card under the same workload. These features (along with a design that minimizes shock and vibration) safeguard against physical damage to the GPU, helping ensure a longer life and reduced total cost of ownership.

Radeon Pro GPUs provide access to unique capabilities that can support these workflows, such as AMD Eyefinity multi-display technology that can allow users to open multiple applications and projects across as many as six high-resolution monitors from a single GPU, like it was a single screen. Radeon Pro Image Boost technology helps ensure a clear, sharp high-resolution image, regardless of the resolution of the native display. AMD Radeon Pro helps engineers evaluate accurate images in the high resolutions required for design and product reviews, marketing, advertising, and other workflows.

In addition, all Radeon Pro GPUs support DisplayPort™ 1.4 for compatibility with up to 8K UHD, High Dynamic Range and other modern monitor types. Several of the Radeon Pro GPUs can also be equipped with standard DisplayPort, Mini-DisplayPort (mDP), or a combination of the two for greater flexibility.

Engineering on the Go: This year engineers all over the world were forced into work-from-home or remote work environments that many companies were not equipped to support. This presented a number of challenges, including access to adequate compute resources, security, and software licensing. The AMD Radeon Pro GPU line has proven it’s up to the task of supporting remote work scenarios via the AMD Remote Workstation solution. With this technology, engineers can confidently run workstation-based applications on mobile devices by remotely connecting to their desktop solutions and compatible GPU.

The Right GPU for Design

The GPU has emerged as a critical enabler of modern engineering workflows, providing the speed and compute power necessary to enable real-time design, simulation, rendering, and other tasks reliably and efficiently.

AMD Radeon Pro GPUs can help engineers and designers improve productivity with superior speed and performance, as well as outstanding power and heat management, multitasking capabilities, and support for current visualization and display workflows. The GPUs also provide out-of-the-box certifications with leading design, simulation and rendering tools engineers need to meet the requirements of simulation-driven design. The AMD Radeon Pro range is available from major workstation providers, and for those looking for an on-the-go mobile solution the Radeon Pro WX 3200 is an excellent choice.

To learn more about AMD Radeon Pro GPUs, and to identify the right graphics card for your application, visit amd.com/ProGPUselector.

© 2020 Advanced Micro Devices, Inc. All rights reserved. AMD, the AMD Arrow logo, Radeon, and combinations thereof are trademarks of Advanced Micro Devices, Inc. DisplayPort™ is a trademark owned by the Video Electronics Standards Association (VESA®) in the United States and other countries. Other product names used in this publication are for identification purposes only and may be trademarks of their respective companies.