How Simcenter STAR-CCM+ combines with AMD 3D V-Cache and Cloud technology to make faster simulation affordable to all.

How Simcenter STAR-CCM+ combines with AMD 3D V-Cache and Cloud technology to make faster simulation affordable to all. 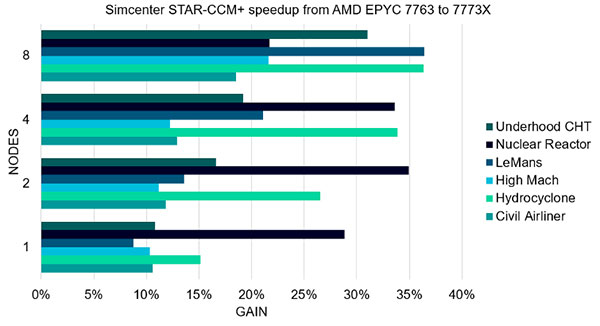 How often do you find yourself sitting twiddling your thumbs waiting for a simulation to complete?

And it’s not just you who’s waiting. Everyone else in the project pipeline needs the data from your simulation before they can do their bit. Delays at this point ultimately lead to a delay of the final product design.

Is it time to review the budget and purchase more processing power to move things along? Unfortunately, it’s not as simple as that. A high-performance computing (HPC) cluster isn’t cheap, and once you’ve got one, you often can’t expand it easily. You need to make the right choice.

But it’s not only a case of adding more and faster CPU cores.

The way simulation software works, more cores and higher clock rates are not enough on their own to deliver high performance for all workloads. Simcenter STAR-CCM+ needs as much low-latency bandwidth as possible which a computer provides in the form of an L3 cache. The AMD EPYC 7003 Series processor cores pack a serious punch, but if the L3 cache they’re trying to retrieve data from isn’t big enough, they’ll have to go all the way to the RAM to get it instead. This takes roughly an order of magnitude longer to retrieve than if it were available in the cache. Factor in the vast amounts of data being processed during a simulation, and you can see why it takes much longer to complete.

To complement the powerful 3rd Gen EPYC processor family, AMD has used 3D lithography technology to pack three times as much L3 cache into a select group of them. These new 3rd Gen EPYC processors with 3D V-Cache™ technology have a whopping 768 MB of L3 cache to be exact. Simcenter STAR-CCM+ needs to regularly grab data to solve flow equations, so this helps ensure there’s less waiting around as it’s more likely to be available in the cache.

What does that mean in terms of the time it takes to complete a simulation?

Let’s take a look at benchmark tests from different industries run on multiple server nodes. The chart featured with this article illustrates the performance difference between the EPYC 7763 and the new EPYC 7773X with 3D V-Cache™ technology.

That’s right, with this new technology, simulations complete up to 35% faster.

Just one of these high-end server nodes isn’t cheap though. And for the best performance you’re going to need a high-performance computing (HPC) system that could cost millions of dollars.

HPC is not something that everyone can afford. Even those that can are likely to be hesitant if they don’t need all that power all of the time. And when management does sign off on a new cluster, you need to keep using it for years. This means building around the average job, not the maximum one.

That’s not what business leaders want to hear though. New products need to be developed as quickly as possible to stay ahead of the curve. And where simulation is a key part of the development process, speeding it up will ultimately lead to getting the product to market sooner – gaining a crucial edge on the competition.

What if there was an alternative solution where companies could only pay for the extra power when they need it? What if the simulation phase could be speeded up without exceeding project budgets?

Take it to the Cloud

Advanced simulation shouldn’t be limited only to those companies who can afford the biggest and best HPC systems. Siemens wants Simcenter STAR-CCM+ to be accessible to all, so that everyone can benefit from the innovations it delivers.

Cloud services to rapidly run CFD can provide an answer to this challenge.

Virtual machines powered by 3rd Gen AMD EPYC processors with AMD 3D V-Cache technology have all the cores and RAM you need, combined with a high-bandwidth, low-latency network backbone to deliver true HPC-class performance and scalability.

Instead of millions of dollars in hardware purchase, users rent resources on a service as and when they need them. So even the smallest consulting firm can afford to run massive and complex simulations at the same speed as the world’s largest companies.

Simcenter STAR-CCM+ relies on technological innovations to keep up with its demands. As we improve the multiphysics CFD capabilities with every release, advances are needed in the hardware it runs on to allow users to get the most out of it.

Without innovations like these new processors from AMD, simulation times would likely continue to get longer and longer the more complex models become. And without cloud platforms, it’s probable that only the biggest companies in the world would be able to take full advantage of what AMD is offering.

This collaboration between Siemens and AMD is pushing the possibilities of simulation to the limit and beyond, as well as helping ensure that it’s available to everyone. Because the more users who have access to fast, powerful simulation, the better engineering innovations can be discovered and realised, and the more people across the world can benefit from them.