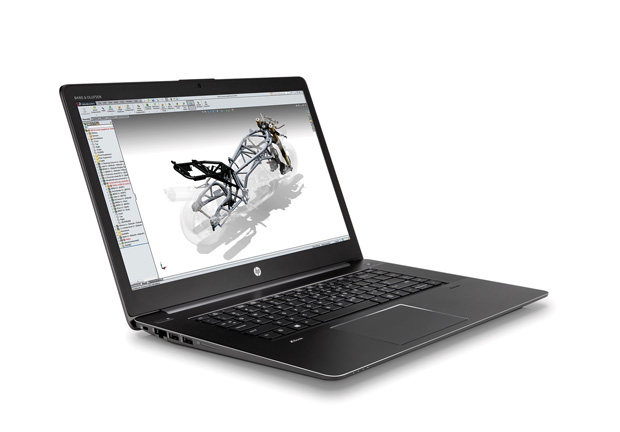 It is always exciting when we receive a new HP Z-series workstation to review. Last September, we looked at the HP ZBook 14 G2. A few months later, we were in New York when HP unveiled its next generation of Z-series workstations, including its ZBook Studio, billed as “the world’s first quad-core workstation ultrabook.”

This new 15.6-in. system comes housed in a magnesium/aluminum alloy chassis wrapped in a beautiful skin. A dotted pattern surrounds an HP logo on the lid; a recessed diamond pattern on the bottom and a band of rubber, makes it easy to hold and helps keep it from sliding around. Aesthetics are nice, but it was the ZBook Studio’s size, weight and performance that won us over.

Raising the lid reveals a spill-resistant 85-key backlit keyboard that is comfortable to use, though the thin chassis results in fairly shallow key travel. A fingerprint reader is positioned to the lower right corner of the keyboard. A pair of speakers connected to a superb Bang & Olufsen sound system flanks the keyboard, while the responsive 4.5x3.1 in. touchpad is centered below the spacebar. Although the touchpad lacks dedicated buttons, it does support gestures for zooming and scrolling. You can also tap near the lower-right corner to right-click and double-click in the upper-left corner to toggle the touchpad on and off—with an amber LED indicating when the touchpad is off.

There is no separate numeric keypad, but you can toggle Number Lock to use the embedded number keys. Another function key mutes the built-in microphone. The Caps Lock, Number Lock and Microphone keys have their own tiny LEDs to indicate when they are selected. LEDs on the left front edge of the case indicate wireless, power, charging status and hard drive activity.

The rectangular power button is located in the upper-left, above the keyboard, and glows white when the computer is on. To the upper-right of the keyboard are dedicated buttons to toggle the built-in wireless capabilities and mute the speakers.

Our evaluation unit came with a beautiful UHD UWVA 3840x2160 IPS (in-plane switching) anti-glare LED-backlit display. HP also offers 1920x1080 FHD displays with or without touch capabilities as well as a DreamColor version of the 3840x2160 panel. A 720p HD webcam is centered above the display, flanked by a pair of microphones as well as an LED that glows white when the webcam is active.

The HP ZBook Studio provides ample ports. Unlike most other HP mobile workstations, the ZBook Studio is a closed system—the bottom is not removable and users cannot replace the batteries.

On the SPEC Viewperf test, which focuses on graphics, the ZBook Studio performed admirably. Although it lagged behind systems equipped with more powerful GPUs, it surpassed the performance of other thin, lightweight systems. On the new SPEC SOLIDWORKS 2015 benchmark, the HP ZBook Studio G3 also trailed a bit behind some of the larger mobile workstations we’ve tested recently—but again outperformed all other comparable lightweight systems.

Throughout our tests, the HP ZBook Studio was practically silent, averaging 29dB at rest and peaking at 39dB under the most extreme compute loads. HP preloaded Windows 10 Pro 64-bit. Windows 7 and FreeDOS 2.0 are also available. Like all of its other workstations, the ZBook Studio G3 is ISV (independent software vendor) certified and backed by a three-year warranty that covers parts, labor and onsite service, including replacement of the battery. It is also built tough and has passed 14 tests under MIL-STD 810G testing.

The HP ZBook Studio G3 sets a new standard as the lightest, most powerful quad-core mobile workstation currently available. As tested, our unit had a total cost of $2,999. At that price, the HP ZBook Studio G3 has the beauty to impress all who see it and the brawn to make a believer out of anyone who uses it.