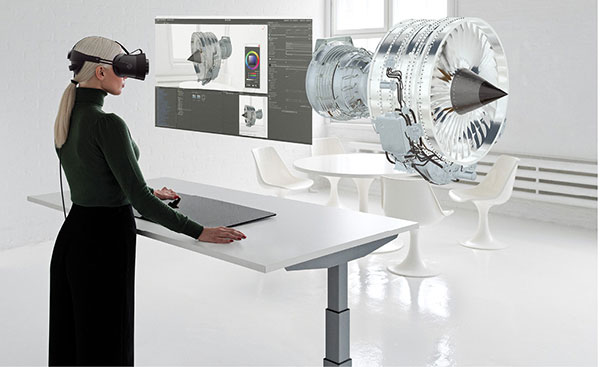 Increased access to virtual reality (VR) is creating new opportunities for product design and manufacturing, from initial design concepts to sales. An ad hoc “tool chain” is emerging as leading manufacturers and small engineering teams bring VR into their workflow. Some uses of VR are extensions of existing use cases, while others are completely new.

Some high-volume workstation customers are looking to vendors to help sort out what technologies are required to create virtual design review sessions, training simulations and showroom experiences. Others are sharing with their preferred workstation vendor how they want to create and use VR, looking for the vendor to put together the right combination of hardware and software.

“The affordability and accessibility of VR is opening greater commercial applications for the technology,” notes Gary Radburn, director of virtual and augmented reality for Dell. Radburn quotes a Gartner study that claims AR, VR and mixed reality immersion offerings will be adopted by 20% of large enterprises as part of their digital transformation strategy by 2020. A similar growth prediction comes from Goldman Sachs, which predicts engineering will be a $4.7 billion market for VR by 2025.

“It is common to see individual components like headsets and graphics cards say they are VR ready, but you can have the best chip in the world for VR rendered moot if your system is underpowered in other areas,” adds Radburn. “A quality VR experience needs all those components to align.” In the case of Dell, it is certifying entire hardware systems—including software—as ready for VR.

Radburn says the Dell VR certification process includes a full perception test, “where we sit and engineer inside the headset for 30 to 40 minutes. An automated benchmark test will not catch all the glitches attached to VR-powered engineering work. Personal vetting of the system and putting it through the paces of simulated workloads ensures that it can do what it promises.”

VRED comes in two versions. VRED Design is for review and evaluation of design ideas and viewing in VR. VRED Professional is a superset of VRED Design for creating high-end virtual prototypes and visualizations that supports NURBS data.

“VRED is excellent,” says Marcus Hartmann, a business development manager for Fujitsu Celsius Workstations in Augsburg, Germany. It allows users to import CAD data from all the leading solutions and host the data in a single environment. “VR is just a tool for visualization,” he adds. “Users need to always rely on raw data sets.”

Fujitsu cooperates with Autodesk in a VR Center of Excellence in Munich for its customers in automotive and other large manufacturing industries.

Koenigsegg is a boutique sports car manufacturer in Sweden building the world’s fastest production automobiles, for between $2 million and $4 million apiece. More than half of a recent production run was sold using VR, says Greg Jones, a senior manager for XR global business development at NVIDIA. The workflow “exemplifies the path from ideation to design to marketing and sales,” he says.

Looking at a fancy car in VR doesn’t need the highest level performance from a workstation or the GPU, but developing the full model does. Koenigsegg creates VR content using workstations equipped with two NVIDIA RTX 8000 GPUs, bridged with VR SLI to run in tandem.

“It is a great use of VR, shopping for scarce goods,” notes Jones. “The only shopping experience available might be VR.”

Jones says NVIDIA is also seeing a rise in the use of VR for product testing and training. Such uses take advantage of digital twins to test and train, even while the product is still in development. 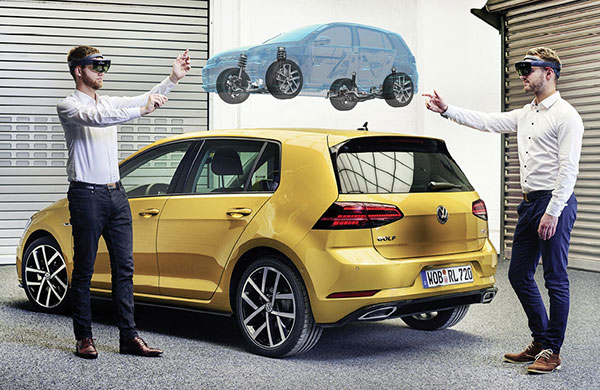 Volkswagen is a leading user of virtual reality in engineering and manufacturing. Image courtesy of Volkswagen.

Bell Helicopter recently put a pilot in a VR simulator before a prototype was built for a new model. Feedback from the testing was incorporated into the design. Jones says design time for the new model dropped from three years to six months as a result. “Training is not just for people; it is also for refining the system you put the people into,” notes Jones.

“We are now into VR 3.0 for enterprise,” says Mike Leach, a workstations solutions portfolio manager at Lenovo. Leach says VR 2.0 was attempting to use consumer-class VR technology. Today, “there is no one-hardware-fits-all; there are multiple ways” to create and use engineering content, he explains.

Automotive remains the leading industrial user of VR, Leach says, but other industries are ready to take advantage. “People want virtual prototypes because pixels are cheaper than bricks,” he adds.

Lenovo is unique among workstation vendors because they also manufacture VR headsets in partnerships. They built the Oculus Rift S and now have a technology partnership with Varjo, the Finnish startup creating photorealistic VR headsets with eye tracking and ultra-low latency suitable for mixed reality applications as well as VR. Leach says the Oculus model ($600) is good for entry-level engineering uses such as product review and design iteration, while the Varjo ($6,500 to $9,995, depending on model) is “unsurpassed in the market” and suitable for collaboration, training and other high-throughput uses of engineering data.

As a hardware vendor, “experience is king” for Lenovo, Leach says. “The computer has to understand headset movement, send it to the GPU and output pixels. Motion to photon has to happen in less than 20 milliseconds or latency and frame issues happen.” Lenovo now ships its Lenovo Performance Tuner, which can optimize hardware performance settings based on customer needs.