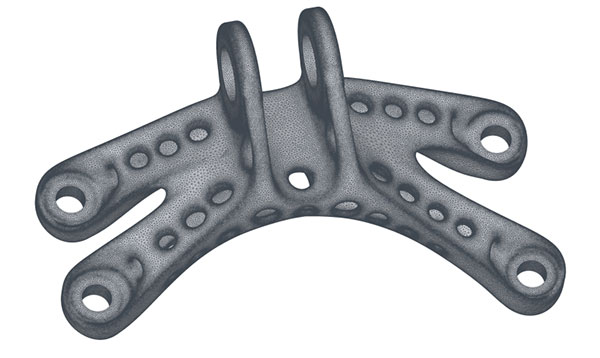 Curvature sensitive remeshing of a bracket to a maximum “chordal” deviation of 0.01 mm.

Some of the improvements in Polygonica 3.1 include:

Regarding remeshing, in this latest release there is new multithreading support for faster remeshing of large datasets. There is also preservation of user-defined boundaries to support mapping of original CAD surface patches and CAE boundary conditions.

As for the shrink-wrapping feature, color, texture and custom face attributes can be transferred to the shrink-wrap. Internal tunnel faces can be extracted as a separate mesh.

For 3D curve operations, users can use regions to mask curve to surface mapping operations, smooth 3D curves generated from noisy region boundaries, and constrain curve smoothing within a region of the surface, for example to prevent crossing feature edges.

“We’ve seen a significant increase in adoption of remeshing during the last year, partly driven by the addition of curvature sensitive remeshing in Polygonica 3.0,” Lin says.

“Our initial investigations into the identification of curvature extrema were specifically to help find gum lines for the dental market,” Lin adds. “We now see the potential value in identifying other feature lines in scanned mesh data for improving reverse-engineering workflows, and we plan to develop this interesting technique further in future releases.”