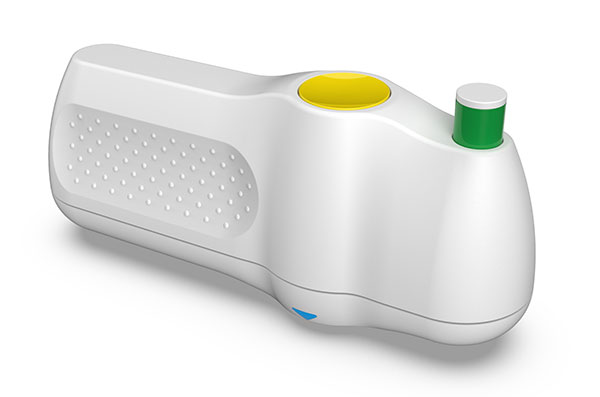 Given all the world has learned and experienced during the past two years of global pandemic, the ability to self-administer vaccines may come as welcome news to many. Image courtesy of PreciHealth.

As billions of people have learned over the past two years of a global pandemic, it’s not much fun to get a vaccine. Nor does anyone like having blood drawn, never mind the time lost visiting the clinic for these events.

Their work was inspired by an annoying, often life-threatening insect.

“Mosquitos have a proboscis that can not only inject fluids into their host but also extract blood, and do both very efficiently,” said Hägen. “Our client PreciHealth had developed some intellectual property around microfluidics that was inspired by this tiny miracle of nature, and they asked us to help bring it into the medical space.”

They came to the right place. Since 1995, BlackHägen Design has focused much of its talent on medical device development. Its work ranges from mechanical equipment such as ventilators and dialysis machines to prosthetic devices and robotic surgical instruments. 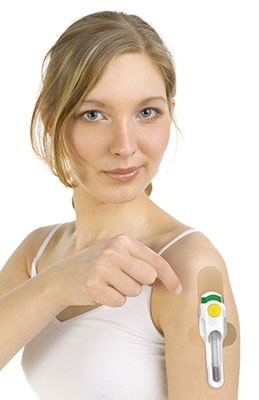 Skip the trip to the doctor’s office. The body fluids sampling device is intended to collect blood and serum at home—safely and securely. Image courtesy of PreciHealth.

“We’ve been pretty much all over the map but over the past few years our focus has been primarily medical,” says Hägen.

In 2018, PreciHealth approached BlackHägen Design because of its reputation in Europe and work with other medical device companies, Phillips and Smith+Nephew among them. As noted, they’d developed microfluidics technology, which, ironically, had been deployed in a very innovative manner for the HYT brand of luxury wristwatches. Now, they wanted to apply their intellectual property to epinephrine injectors, used to save victims of anaphylactic shock.

“These devices have been around a long time, but they’re fairly big—maybe 8 inches long and an inch or so in diameter, and you’re supposed to carry two of them with you all the time,” Hägen says. “[PreciHealth] designed an auto-injector the size of a pen cap, which was cool but turned out to be too small for someone having an allergic reaction to operate and would have required a customized foundation.”

BlackHägen conducted a series of studies using human factors engineering (HFE), a design approach that looks at ergonomics as well as user experience, product safety and other elements that affect product performance.

“HFE is the scientific rigor around understanding a human’s limitations when interacting with machines, whereas usability design takes that insight and translates it into devices that are hopefully both safe and easy to use, something that’s not always easy to achieve,” Hägen says. “BlackHägen has become very good at harmonizing the two.”

Those studies eventually evolved into two product designs: one that would allow users to self-vaccinate and the other for collecting patient blood samples—both intended for at-home, remote medical treatment.

Achieving this, however, was not as simple as it might sound. Aside from making the devices one-handed, easy to use and pain free, PreciHealth needed them to be secure—there could be no doubt that the blood sample would be drawn from, or the vaccine injected into, anyone but the intended patient.

“Together with Sean and his team, we brainstormed ways to perform these procedures at home while eliminating the possibility that anyone might try to cheat the system,” says PreciHealth’s Jaccard. “That’s when we had the idea of using a smartphone. This would serve to identify the person while also making sure that the process was done correctly.”

Like BlackHägen, PreciHealth also wanted to apply HFE principles. “There are a lot of players in this market, and we’re one of the few to take an ‘I’m a patient, what would I like to use?’ approach to product design,” he adds. “These products are a great example of what’s possible when you think of the patient first, rather than relying on aesthetics or cost.”

In addition to HFE, BlackHägen relies on more traditional design tools. Hägen explained that his engineers start a project by digitally sketching design concepts before modeling them in SolidWorks, which PreciHealth also uses. And because the client is based in Europe, the usability studies mentioned earlier are livestreamed using three cameras, so that everyone involved can watch the participants evaluate the product prototypes and give feedback via live simulated use case scenarios.

From Sketch to Solid

The initial versions of those prototypes—or sketch models—are produced in-house on one of BlackHägen’s fused deposition modeling or stereolithography apparatus 3D printers. The more robust and functional versions used in HFE testing are usually subcontracted to an additive manufacturing (AM) service provider, as are machine parts and electronics, before being assembled at the Dunedin facility.

“There are so many different flavors of 3D printing and materials that might be needed in various combinations that we couldn’t possibly have all those machines here,” says Hägen.

They also relied on an outside firm to develop the security technology between the smartphone and the two devices, although Hägen points out that it was his team that developed the user interface. With that comes the cradle-in-the-kit packaging that holds the phone and records the person as they take a blood sample or give themselves an injection, thus meeting PreciHealth’s requirements for a safe, secure, simple device.

“We found during usability testing that a layperson can get pretty stressed out over the whole process,” he says. “It wasn’t just a matter of them sticking a needle in their arm, but the anxiety of properly executing each of the various steps and doing so in the correct order. Add to this the possibility of the phone ringing or the dog trying to jump in your lap during the middle of the procedure and you can see the importance of developing an out-of-the-box solution that’s both straightforward and intuitive.”

As it turns out, they were quite successful. On March 1, 2022, Sean Hägen, together with BlackHägen designers Bartosz Korec, Gary Gogolin and James Brown, were named contributors on a multi-country medical device patent for their auto-injector design. This was followed by a second patent listing Hägen, Korec and company co-owner and director of design and development Philip Remedios, as co-inventors on the “Body Fluids Sampling Device and Method of Using the Same,” both filed by PreciHealth.

“We see this as a big first step forward for our company’s entry into the digital health market,” says Jaccard. “We’re very pleased with the work done by the team at BlackHägen Design and look forward to collaborating with them again.”

Kip Hanson writes about all things manufacturing. You can reach him at .(JavaScript must be enabled to view this email address).