The latest edition of the MTower PCIe from @Xi is the fastest single-CPU workstation we have tested so far.

The latest edition of the MTower PCIe from @Xi is the fastest single-CPU workstation we have tested so far. 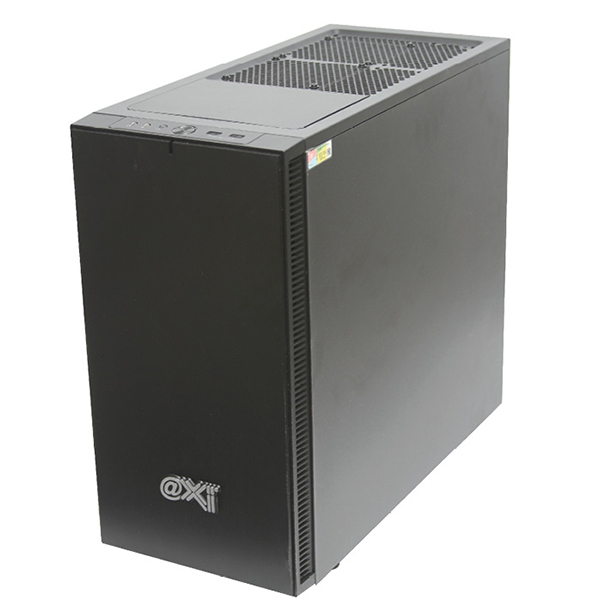 California-based @Xi Computer Corporation recently sent us another iteration of its MTower PCIe workstation. Once again, despite retaining the same name as the system we reviewed last year (see DE October 2018), the workstation we received was entirely new.

Based on one of the latest Intel Core X-series Skylake processors, the MTower PCIe workstation we received this time came housed in a large Fractal Design Define S black tower case measuring 9.17x20.94x18.31-in. (WxDxH) and tipping the scales at 32 lbs.

This case design features a round power button centered in the top-front edge of the case, with a reset switch, microphone and headphone jacks to its left and a pair of USB 3.0 jacks to the right. The rear two-thirds of the top of the case consists of a ventilation port, with the radiator for the liquid cooling system below it, while the flat front panel sports only a large @Xi logo—there are no accessible drive bays on the front of the system. A removable filter helps prevent dust from entering the case.

The rear panel includes a pair of USB 3.1 Gen2 Type-A ports, four USB 3.1 Gen1 ports, four USB 2.0 ports, a PS/2 keyboard/mouse connector, an RJ-45 jack for the integrated gigabit ethernet and an optical S/PDIF out port. The panel also has five audio jacks, including a line-in/side speaker out, line-out/front speaker out, microphone, center/sub-woofer out and rear speaker out. The NVIDIA graphics card in our evaluation unit provided four DisplayPort connectors plus a USB-C port.

Prices for this latest edition @Xi MTower PCIe workstation start at $1,098 for a system based on an MSI Z370M motherboard, with a six-core 2.8GHz Intel Core i5-8400 CPU, 8GB of RAM, NVIDIA GT610 graphics board, 1TB 7200rpm SATA hard drive, mouse and keyboard, running Windows 10 Home and housed in a CM-N200 case with a 600-watt power supply. (Note that the online base price of $1,098 includes a monitor, which we removed when calculating our system price, and a one-year parts warranty, which we upgraded to three years.)

As we now expect, everything about this @Xi workstation, including the case and motherboard, is customizable. In fact, we counted more than 13 different motherboard choices and 40 different cases, including towers, cubes and rack-mount systems. The Fractal Design case with sound dampening materials that housed our evaluation unit added $49 to the base price. 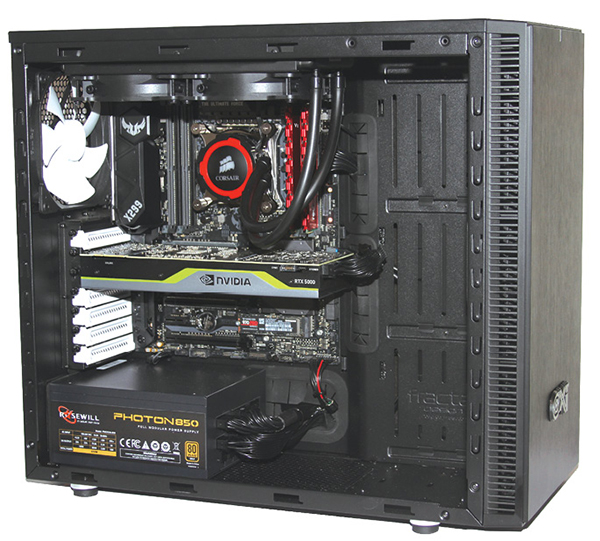 The interior of the @Xi MTower PCIe workstation and ASUS motherboard offer lots of room for expansion. Image courtesy of David Cohn.

Loosening a pair of captive thumb-screws and removing the case’s left side panel revealed an expansive interior. Our evaluation unit was based on an ASUS TUF X299 Mark 2 motherboard, adding $219. This motherboard, with an Intel X299 chipset, provides eight memory sockets and supports up to 128GB of non-error-correcting code unbuffered memory at speeds ranging from 2666 to 4000MHz. Our system came with 32GB of RAM, using a pair of 16GB 3200MHz high-performance Mushkin Redline memory modules, which added $349.

@Xi also offers a choice of 14 different Intel CPUs, with additional options for over-clocking. Our evaluation unit included an Intel Core i9-9920X. This CPU has a base frequency of 3.5GHz and a maximum turbo speed of 4.4GHz; the CPU in the system we received had all 12 of its cores over-clocked to 4.3GHz, which added $1,999. That option also included a Corsair H105 sealed liquid cooling system with a dual fan radiator; @Xi charges less for slower over-clocking. The Core i9-9920X has a 19.25MB SmartCache, a Thermal Design Power rating of 265 watts and does not include embedded graphics.

The ASUS motherboard also provides ample expansion, with three PCIe x16 slots, one PCIe x4 slot and two PCIe x1 slots. @Xi offers a choice of 18 NVIDIA graphics boards, ranging from the GT610 in the base configuration to the Quadro GV100, and our evaluation unit came with the new NVIDIA Quadro RTX5000, which added $2,299. In addition to its 3072 compute unified device architecture cores and 16GB of dedicated GDDR6 memory, this eighth-generation NVIDIA board includes 384 Tensor cores and 48 RT cores for real-time ray tracing and accelerated AI.

With a 256-bit interface, it provides a memory bandwidth of up to 448GB/second. Its 265-watt consumption requires an auxiliary 14-pin power connector. Again, @Xi offers a choice of 10 different power supplies. Our system included a Rosewill Photon 850-watt 80 Plus Gold power supply, which added $79 to the system price.

For storage, @Xi offers more than 50 different hard drives, including SATA and SAS drives of up to 4TB, and solid-state drives ranging from 250GB to 4TB. The company also offers more than a dozen optional storage drive controllers. But the ASUS motherboard includes two M.2 sockets and can support up to six SATA drives; the Fractal case provides ample space.

The system we received had a single 512GB Samsung EVO 970 Pro M.2 PCIe drive, which added $249 to the base price. Systems with multiple drives can have them set up in RAID arrays.

Depending on the case you select, you can equip your MTower PCIe workstation with a multi-bay backplane module to support hot-swappable drives. For those cases with front-panel access, @Xi also offers various internal optical drives. The company also offers other storage and multimedia devices, virtual reality headsets and software, optional sound cards and a selection of networking options.

With its over-clocked 12-core CPU and high-end NVIDIA graphics board, we expected the new @Xi MTower PCIe workstation to perform very well, but its performance simply blew us away. On the SPECviewperf benchmark, the MTower PCIe turned in the best results we have ever recorded on many datasets. It also scored near the top on every aspect of the SPECapc SolidWorks benchmark. 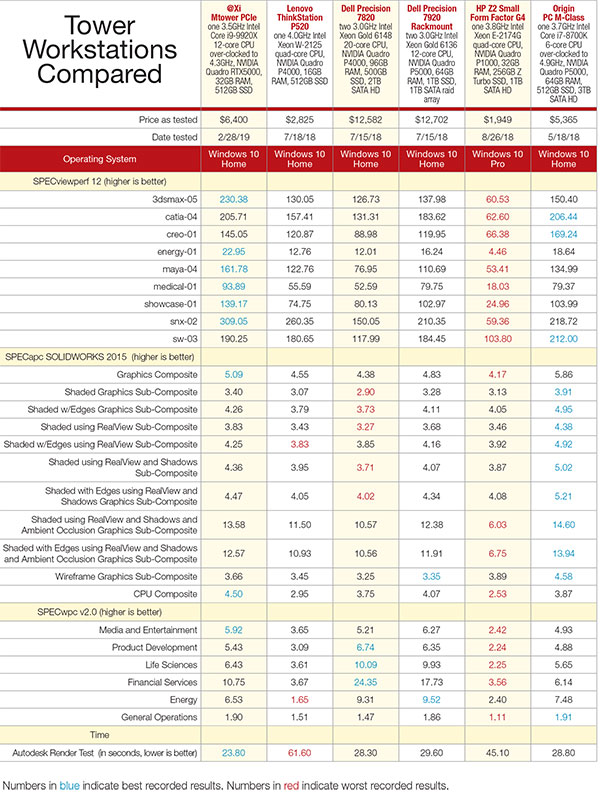 On our AutoCAD rendering test, which clearly shows the advantage of fast CPUs with multiple cores, the @Xi MTower PCIe workstation averaged just 23.8 seconds to complete our test rendering, making it faster than any other workstation we have ever received.

We also ran the very demanding SPECwpc workstation performance benchmarks. Here again, the @Xi MTower PCIe performed extremely well (compared with other single-CPU systems), delivering the top score on 14 of the 33 individual tests and earning the best results we have ever recorded for a single-CPU system in three of the six categories, including Product Development (on which we base our price/performance chart). Despite a total of six fans (front and rear case fans, two radiator fans, plus fans in the graphics processing unit and power supply), the system remained nearly silent throughout most of our testing, although heavy compute loads during some tests briefly pushed sound levels to 60dB.

@Xi pre-loaded Windows 10 Professional 64-bit, a $59 upgrade over the cost of Windows 10 Home. You can also opt for one of 10 different flavors of Linux, Windows 8.1 or no pre-installed OS. The system was rounded out with a 104-key Logitech USB keyboard and USB mouse, but again, @Xi offers lots of other input options.

Like many system integrators, @Xi’s standard warranty only covers parts for 1 year, although the company includes 3 years of coverage for labor and lifetime tech support (and some components may include longer coverage). Warranties of up to five years are available for an additional cost. 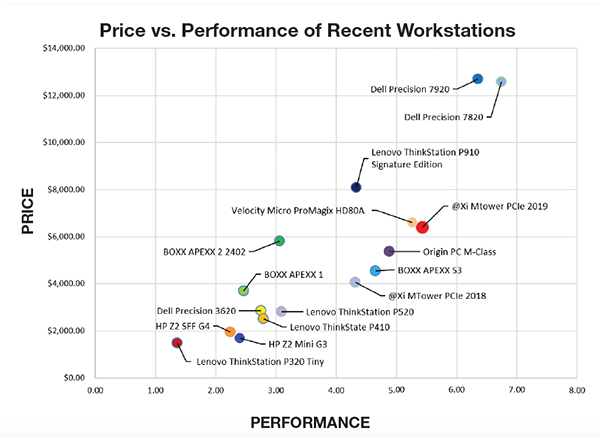 After tallying everything up and including $99 to reflect a full three-year parts warranty, our evaluation unit priced out at $6,400. Opting for a less powerful GPU (such as a Quadro P4000) would save $1,400, while adding additional storage (such as a 2TB data drive) would increase the cost by $139.

Only the pair of Dell workstations we reviewed in November 2018 (Dell Precision 7920 and Dell Precision 7820), equipped with dual CPUs, outperformed this @Xi workstation, and those two systems cost more than $12,500 each.

As tested, this edition of the @Xi MTower PCIe workstation represents the best price/performance configuration we have ever tested.