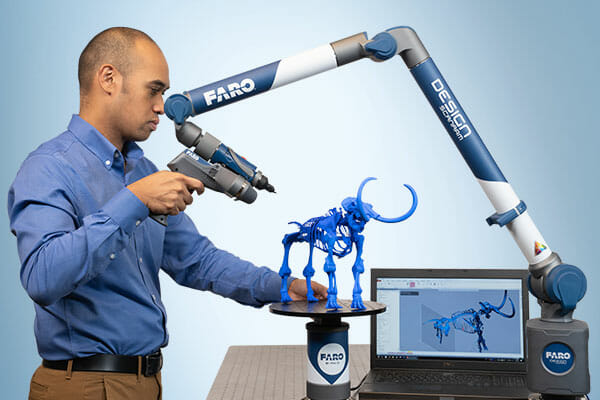 Structural Analysis with OnScale Solve™
In this webinar, we'll cover what's necessary to run a structural simulation in OnScale Solve,...
Editors Pick of the Week Resources

FARO has been on a tear lately with a bunch of new releases. They introduced an 8-axis articulated arm and a new laser line probe. And they also announced a new inspection system for early adopters to check out called OneClick. You can Google it, but the gist is it's an automated inspection system for high-accuracy point-cloud inspection of small and medium sized parts.

But what catches the eye because it's available right now is a new turnkey system that brings together the new probe and the new 8-axis arm. The integration is called the FARO Design ScanArm 2.5C. If your gig involves scanning and making sense of point clouds, this sounds like it's worth a quick scan.

FARO says that the Design ScanArm 2.5C is the first portable measurement arm system on the market to have full-color 3D scanning. It seems to me that it's about time for this. We live in a techno-colored world after all.

The new 8-axis FaroArm comes in 2.5m, 3.5m and 4m lengths, so it covers a variety of work scenarios. The company says it's been purposefully engineered to address design challenges people in engineering and computer graphics outfits, engineering services, automotive, industrial machinery and manufacturing of all types run up against. You know, 3D modeling, reverse engineering, visualization, inspection and all those types of jobs hard to explain to your cousin, the kale smoothie-making master.

Faro has built a rep for cracking good ergonomics. Suffice it to say that it's a good assumption that the eighth-axis should reduce a bunch of repositioning and glide effortlessly, letting you capture points with fewer movements than you'd expect. Only it’s the laser probe that really captures the points.

The PRIZM laser probe, besides its full-color capabilities, gives you scanning speeds of up to 600,000 points per second and volumetric accuracy up to 75 microns. You can bundle it and the 8-axis FaroArm with some Geomagic point-cloud handling toolkits from 3D Systems.

Put it all together, and it sounds like the FARO Design ScanArm 2.5C could be a highly useful way to go about your job. Hit today's link for more details.

Anthony J. Lockwood is Digital Engineering’s founding editor. He is now retired. Contact him via de-editors@digitaleng.news.