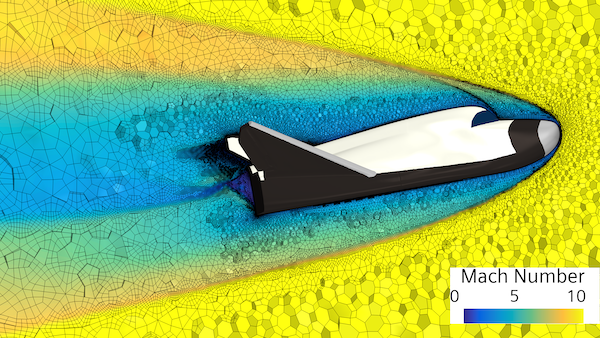 How aerospace companies design and manufacture aircraft is in flux, with the form and function of tools and practices constantly changing. Many of these shifts are aimed at catapulting simulation technology into new roles, with software providers redefining the capabilities of the platforms to meet emerging user expectations.

Understanding the catalysts of the changes and the directions toward which simulation platforms are moving in the aerospace industry will help companies and engineers in other market segments to better prepare for the future.

The immediate goal is to enable simulation platforms to take on larger, more complex simulations that entail significantly more data points and encompass the full spectrum of engineering domains (Fig. 1).

To meet this goal, software developers now want their simulation platforms to model multiphysics applications in an integrated workflow. This means allowing users to easily change or add to the underlying theoretical equations and tie equations into optimization and uncertainty quantification techniques.

“High-fidelity, multiphysics and multidomain simulations that can explore the entire design space have become imminent,” says Sunil Karri, lead application engineer at Ansys. “With large amounts of data and design points being explored and validated through simulations, a centralized platform for managing all the simulation data and having traceability for the data being generated has become increasingly important.”

Complementing the multiphysics trend is the democratization of simulation. Simulation software providers have begun to take steps to make tools more accessible to a wider range of engineers.

“Software vendors are pushing to expand the simulation base, taking simulation from the realm of pure modeling specialists and making the simulation tools accessible to smart engineers who may concentrate on other aspects of aircraft manufacture and operation,” says Philip Kinnane, senior vice president of sales at COMSOL.

A Focus on Aircraft Sustainability

Another catalyst to enhance simulation technology is to support design and development of more sustainable aircraft.

“Sustainability is changing the landscape for the aerospace industry, from use of alternative fuels and hybrid/electric propulsion systems to eco-friendly airframes,” says Sunil Patil, principal application engineer at Ansys. “The industry must respond to these changes in a very aggressive timeline, where traditional heavy reliance on physical testing is not an option and simulation-driven design is an accelerating path to sustainable aerospace.” 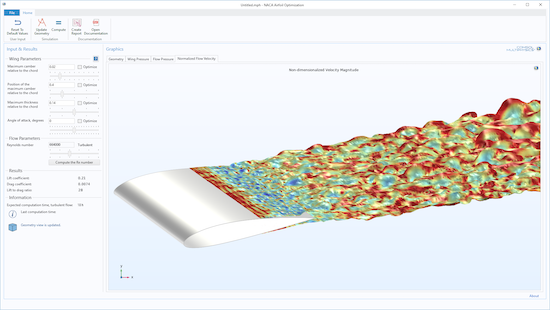 Fig. 2: This screen shows simulation use to optimize an airfoil’s operating parameters. In this case, simulation helps finetune the camber, relative to the chord line positioning, angle of attack, and fluid-flow velocity to maximize the lift-to-drag ratio. Image courtesy of COMSOL.

Lightweighting is a primary technique used by aeronautical engineers to acheive sustainability. It reduces aviation emissions and increases energy efficiency.

The principle behind lightweighting is that designs that use less material and reduce density, while ensuring equal or better technical performance, shrink the aircraft’s carbon footprint. With reduced mass, the aircraft requires less lift force and thrust during flight, consuming less fuel and producing fewer emissions. For example, a 20% weight reduction in a Boeing 787 results in a 10% to 12% improvement in fuel efficiency.

This push for lighter, stronger parts has accelerated the evolution of simulation techniques, expanding parametric and topological optimization capabilities and enhancing the technology’s ability to parallelize parametric design studies (Fig. 3).

“Being able to lightweight aircraft materials usually requires robust optimization strategies, algorithms and tools that also consider the multiphysics aspects of modern aircraft design,” says Kinnane. “These lead to the best material choice design geometries, usually in symbiosis with each other to ensure cheaper and more sustainability aircraft manufacture.” 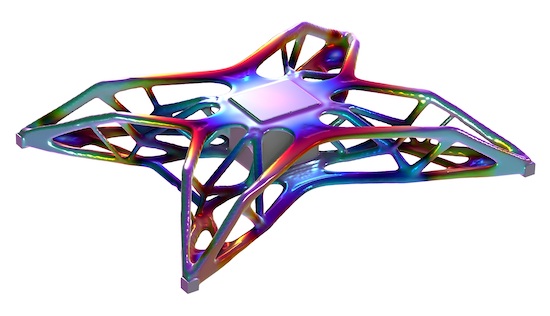 Fig. 3: Simulation-driven topology optimization can be used to identify the most effective geometry for aerial vehicles. In this case, the development team is using simulation to optimize the manufacturable structure of a drone, identifying the material layout that will maximize stiffness and minimize mass. Image courtesy of COMSOL.

Simulation-driven optimization enhancements also can be found in other areas. For example, parametric space exploration has advanced from simple sweep algorithms to the Pareto Front approach, with reduced-order macro-modeling used to build response surfaces. This translates into far fewer simulation runs for even further speed enhancements.

Additionally, users can now expect to see improvements in meshing methods for finite element analysis and computational fluid dynamic approaches. This allows complex geometries and assemblies to be handled and efficiently meshed by simulation tools.

In addition to these improvements in simulation capabilities, broad process enhancements have also been achieved.

“Simulation tool workflows have also been progressively simplified, as a result of strategic partnerships between vendors, in-house development, or even mergers and acquisitions of the component solution providers,” says SimScale’s Leturio Barea. “The end result is far more streamlined workflows that eliminate the need to jump in and out of tools from multiple vendors and require less scripting and [application programming interfaces]—meaning that these solutions are easier to deploy and maintain, generally lower in cost and more accessible to designers and engineers.”

Composite Materials as a Force of Change

A key component of lightweighting that has affected simulation usage is the increase of composites in airframes. The materials have not only created new opportunities for reducing aircraft mass and increasing sustainability, but they have also played a major role in reshaping simulation’s toolset.

“Simulation tools can now handle far more complex, mixed-layer fiber orientations, through to fully anisotropic material properties,” says Leturio Barea. “Workflows have kept pace such that engineers can now easily set up time-transient thermal simulations to gain insight into the composite cure process so that the effects of warpage and residual stress can be factored in or even eliminated.” This has led to  positive benefits in other industries, for examples, wind turbine development and the medical equipment space, where carbon fiber use is increasingly common.

“As the computing power has grown, the ability to do finer and more detailed simulation analysis has also grown, which has enabled more advanced functionalities that provide a true understanding of how the product operates down to the molecular level, which is necessary when you start thinking about functionality like lightweighting,” says Dale Tutt, vice president of industry strategy at Siemens Digital Industries Software. “With lightweighting, you must be able to do advanced structural analysis and fatigue analysis, and simulation now provides the tools to do it.” 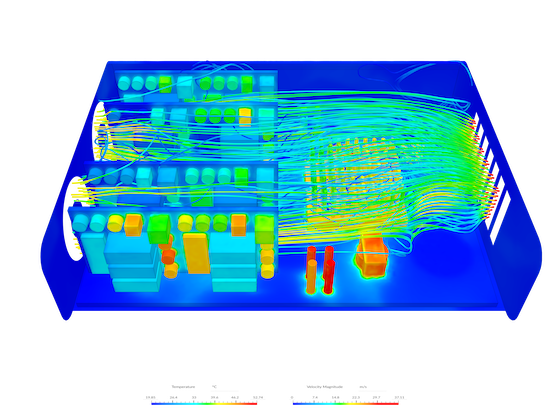 Fig. 4: This image shows simulation of the cooling process inside an electronics enclosure. The growing importance of electromechanical systems in the overall design of aircraft has helped accelerate the development of electronics simulation tools. Image courtesy of SimScale.

Another area in aerospace design seeing significant advances is in electromechanical systems simulation (Fig. 4). One of the reasons this class of simulation has gained prominence is a change in the industry’s mindset.

“As our products have become more and more complex, the systems on the aircraft have become electromechanical systems,” says Tutt. “In the past, we thought of them as mechanical systems or electrical systems. Today, however, everything is a mechatronic system that has mechanical, electrical, electronic and software elements (Fig. 5). As a result, we are now designing multidomain systems, so the design and simulation tools have had to mature with those as well. Advanced simulation and data management systems are no longer optional.”

In addition to the acknowledgment of the mechatronic sea change, a more immediate factor is driving simulation’s evolution in this area.

“Because electromechanical systems tend to drive development time, companies are relying more and more on simulation and the digital twin to optimize the performance of the aircraft and to validate that it’s going to work before they go into the large-scale test programs, which is saving companies a lot of time and money,” says Tutt.

Increasing electrification of the transportation sector and improvements in battery system performance and reliability is another factor in increased simulation use. Industry watchers predict that commercial electric flights are expected within the next 10 years.

“Simulation will play a major role in de-risking this transition and the evolution of the aircraft powerplant,” says Leturio Barea. “Similar to structural and fluid simulation tools, electromagnetics simulation tools have also evolved. These include improvements in ease of use, solver speed and solver ability to use high-performance computing. Workflows have also been progressively simplified, with very intuitive template- and table-driven tools evolving rapidly in the past five years.”

It is critical for simulation data to be well integrated into digital threads to ensure that the data forms an integral part of a product’s digital lifecycle management. Doing so allows aerospace companies to efficiently understand what-if scenarios such as when they are considering changes in suppliers, material grades or machining process tolerances.

The inclusion of simulation data is also important because aerospace companies must understand in real time the performance and wear and tear on complex, expensive and safety-critical assemblies like aircraft engines and airframes.

Unfortunately, incorporating simulation data into digital threads is easier said than done. The obstacles that plague digital thread implementations in other industries seem to be amplified in the aerospace environment.

“The chief challenge is the sheer quantity of simulation data that must be managed, quantified and analyzed to make the product lifecycle as efficient as possible,” says Kinnane. “Reducing the amount of unnecessary or less important data or ideas that will never lead to fruition, at the level of the creation of simulation data—the modeling and model—permeates through the workflow of the digital thread and leads to better results, faster.”

This becomes particularly relevant when feeding simulation data from on-premises simulation tools and hardware into digital threads. In these circumstances, the large volume of data associated with aircraft database files and the quantity of results that must be transferred and backed up can create bottlenecks that hinder success.

Many simulation software providers and users contend that the solution to this problem lies in moving simulation processes and data storage/management to the cloud.

A related obstacle is the diversity and quality of simulation data. One way around this hurdle is to homogenize the data from all of the systems within a company’s IT infrastructure that contribute to the digital thread data sources.

“We are working to close the air gaps between our customer, the system-of-system context, engineering, manufacturing, sourcing and sustainment,” says Bill Gundrey, executive director of digital transformation at Raytheon Missiles & Defense. “This means that, for example, mCAD models are being developed to be suitable for use in production, comprehensive, analyzable representations of our system in test environments, producible and operational.”

A less company-specific approach calls for the implementation of a simulation process and data management (SPDM) system.

Even this approach, though, has challenges, such as knowing what data should be incorporated in the digital thread and at what point this should occur. Furthermore, simulations are often iterative, and the designer doesn’t have to run a simulation for every design change and model simplification. This means that simulation data does not always have one-to-one associativity with CAD data.

Tom Kevan is a freelance writer/editor specializing in engineering and communications technology. Contact him via de-editors@digitaleng.news.