This new lightweight mobile workstation performs great, but for a price.

This new lightweight mobile workstation performs great, but for a price. 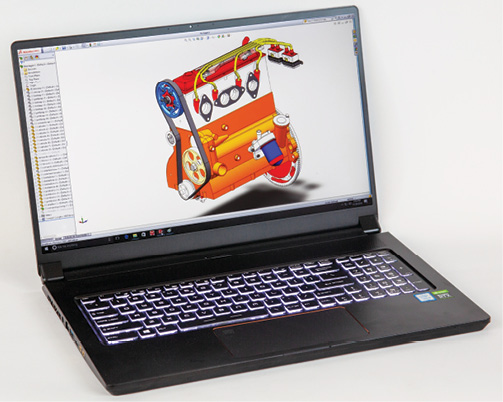 FREE WEBINAR: BOXX and NVIDIA Launch New Era of Product Development...
In this webinar, you'll learn how GPU technology is enabling a new era of product...
Traditional PC Shipments Saw a Sharp Decline in Q1 2020
The decline comes even in the wake of increased demand to meet remote work and...
No One-Size-Fits-All Optimal System
Software use and workload should determine IT manager workstation selection.
Performance without Breaking the Bank: Velocity Micro ProMagix HD60 ATX AMD...
This system integrator delivers a price/performance winner.
More Workstations

The GoBOXX SLM 17 we recently received continues that tradition. A quick check confirmed that the SLM 17 was indeed the same system as MSI’s recently introduced WS75 system.

We reached out to BOXX regarding the price difference between this BOXX mobile workstation and the MSI-branded version of this same system we found online. Matt Priest, GoBOXX Product Manager, responded:

“Unlike our APEXX desktop workstations and RAXX servers, GoBOXX mobile workstations are manufactured and branded for BOXX by MSI. But just like our workstations and servers, these laptops are then subjected to rigorous BOXXlabs testing to ensure that they are indeed certified to run specific software applications. In some instances, configurations are modified to ensure that each GoBOXX delivers maximum performance and is qualified to wear the BOXX mantle of ‘purpose built.’ To ensure rapid repair or replacement, we stock spare parts and back GoBOXX laptops with U.S.-based, legendary BOXX Technical Support.”

“The MSI laptop price, as found on Newegg, Amazon or other retail sites is commonly referred to as a ‘street price’ and is the final price whereas the GoBOXX price on box.com is an MSRP or starting price required by government, GSA and other entities. BOXX offers discounts on this MSRP—especially with bulk corporate purchases. Therefore, comparing the two system prices is not an ‘apples-to-apples’ comparison. In addition, BOXX only serves the professional market, not consumers, and as such, we provide professional services (loading a corporate image, system validation, etc.) under the mantle BOXX for Enterprise. We also offer terms so business customers can purchase through an account and not just via credit card.”

First announced in August at SIGGRAPH 2019 in Los Angeles, the new BOXX GoBOXX SLM 17 is a thin, lightweight 17.3-in. mobile workstation based on a 9th-generation Intel Core i9-9880H processor and a discrete NVIDIA Quadro RTX graphics board; it’s dubbed an RTX Studio laptop.

Unlike some of the mobile systems from BOXX we have previously reviewed, however, BOXX does not have many customization options. Instead, the company sells three different pre-configured versions of the GoBOXX SLM 17.

All come with the same CPU, 32GB of RAM and the same 1920x1080 HD display. The only difference is the specific graphics processing unit (GPU) and the capacity of its solid-state hard drive.

For this review, BOXX sent us its least expensive configuration, a $3,850 system equipped with a virtual reality-ready NVIDIA Quadro RTX 3000 graphics board and a 512GB solid-state drive (SSD).

Raising the lid on the GoBOXX SLM 17 reveals a 102-key backlit keyboard with a separate numeric keypad. Although the key tops are flat, the keyboard has a good feel with adequate travel.

A multi-touch enabled 5.5x2.5-in. touchpad with built-in fingerprint reader is centered in the palm rest, which means it is not centered on the spacebar. Although the touchpad lacks dedicated buttons, you can still right-click by tapping the lower-right corner of the touchpad.

A perforated grille above the keyboard conceals the built-in stereo speakers. A small power button, centered above this grille, is nearly invisible.

A 720p webcam, flanked by microphones and an LED, is centered above the 17.3-in. 1920x1080 ISP display. A small LED to the left of the keyboard indicates the Caps Lock status, but unlike most other laptops, there is nothing else to indicate when you have engaged the Number Lock or other keyboard-enabled functions.

In fact, other than a small light to the left of the power button—which glows white when the system is on and using the Intel graphics, and amber when the discrete NVIDIA GPU is in use—the only other light of any kind on the SLM 17 is a battery status indicator near the front right edge of the case that blinks if the battery fails.

The SLM 17 also uses the same somewhat awkward keyboard layout found on similar laptops, though it certainly doesn’t take long to get used to the odd location of some keys.

The GoBOXX SLM 17 includes an excellent selection of ports. Along the left side is an air vent, the power connector, an RJ-45 network jack, a USB 3.2 port, a card reader and a pair of audio jacks (headphone and microphone) for the built-in Realtek high-definition audio. The right side has a security cable slot, another air vent, HDMI port, a USB 3.2 Type-C/Thunderbolt port, two additional USB 3.2 ports and a second USB 3.2 Type-C port. There are no other ports on the rear of the system. Additional speakers, a large ventilation grille and a battery reset hole are located on the underside of the system.

All three versions of the GoBOXX SLM 17 are powered by a 2.3GHz Intel Core i9-9880H eight-core Coffee Lake CPU with a 4.8GHz maximum turbo boost. This processor, which has a 45-watt thermal design power rating, features a 16MB cache and integrated Intel UHD Graphic 630.

All SLM 17 systems also include a discrete NVIDIA Quadro RTX GPU. The RTX 3000 included in our evaluation unit has 6GB of dedicated GDDR6 memory, 1920 CUDA cores, 30 RT cores and 240 Tensor cores while consuming a frugal 80 watts. Coupled with its 192-bit interface, the RTX 3000 delivers a maximum bandwidth of 336 GB/second.

With its relatively fast CPU and powerful GPU, we expected this BOXX mobile workstation to perform extremely well, and the BOXX GoBOXX SLM 17 delivered. 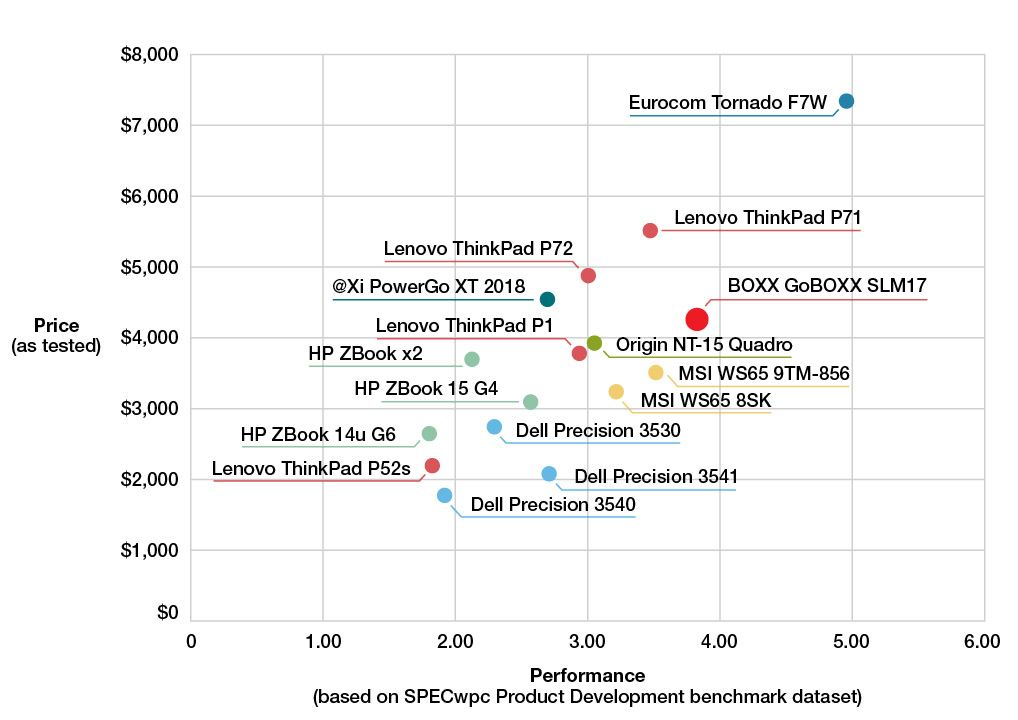 On the SPECviewperf tests, it turned in excellent results on every dataset, outperformed only by systems equipped with even more powerful NVIDIA graphics boards. The SLM 17 delivered equally impressive results on the SPECapc SolidWorks tests. On the demanding SPEC workstation performance benchmark, the BOXX GoBOXX SLM 17 led the pack among mobile workstations we have tested recently.

On our own AutoCAD rendering test, the 45.9-second average rendering time was one of the fastest we’ve ever recorded for a mobile workstation. Despite its performance, the GoBOXX SLM’s four-cell 82-WattHour battery still managed to keep the system running for 8 hours and 37 minutes. The system remained cool and quiet throughout our tests.

Since most workstation-class systems typically include a three-year warranty, our as-tested price includes the $350 BOXX charges for the longer warranty, which brought the total price to $4,200. 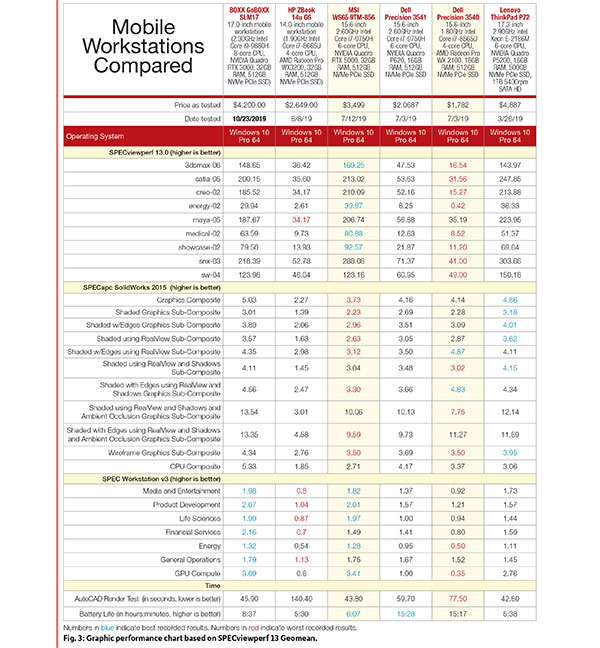 The BOXX GoBOXX SLM 17 is clearly a great choice for any engineer or designer who needs a thin, lightweight VR-ready system they can depend on whether they’re in the office or on the road.

But potential buyers should also consider the MSI-branded version of this same system, which we found online for $1,000 less.