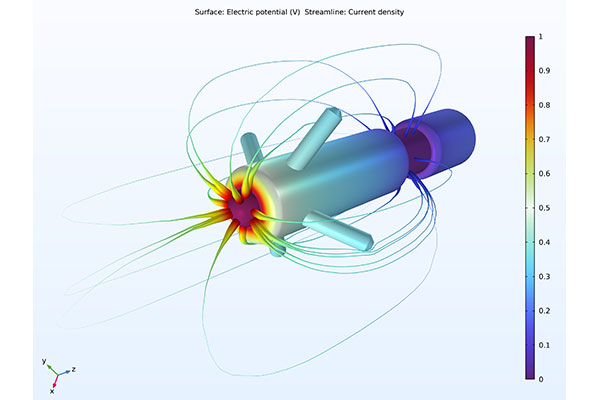 Computational modeling has great use cases in biomedicine, especially in medical device development. In a keynote address during COMSOL Day: Biomedical Devices (June 9, 2022), William Torres, a senior associate at consulting firm Exponent, outlined the biomedical field’s use of computational modeling.

“In biology, we have an appreciation and understanding of what happens at the molecular level, how cells interact with one another, how all of these make up an organ, how organs make up systems in the body. Importantly, we now understand how these systems interact with one another. The value proposition for computational modeling and simulation in biomedical engineering is as strong as ever before. The clear challenge ahead of us is to learn to use modeling and simulation in support of medical devices to eventually get them approved for use by the powers that be,” he said.

For the U.S., the “powers that be” are the Food and Drug Administration (FDA). The regulator has several initiatives to promote use of computer models in the biomedical field.

The National Institutes of Health is the online home of the FDA’s project of the Center for Devices and Radiological Health dating back to 2012, on “Improving the Use of Computational Fluid Dynamic (CFD) Techniques to Evaluate Performance and Blood Damage Safety in Medical Devices” (bit.ly/3nHx690).

Aside from the FDA’s workshops, in 2018, the American Society of Mechanical Engineers (ASME) developed and published a set of guidelines called V&V40 to assess credibility of computational modeling and simulation results through verification and validation, specific to medical devices.

“We now have definitive answers as to what they [FDA] are looking for when they review the submissions,” says Torres. Despite the interruption of the COVID-19 crisis in the last two years, “the development of computational modeling tools and applications is growing as fast as ever.”

Torres believes critical design questions can be answered easily in modeling, “whether it be how thin we can make the struts of a Nitinol stent graft to what color the packaging label should be.”

In the paper, Rodrigues proposed deploying “3 rings of 24 dipole antennas (30 × 6 mm ^ 2) enclosed in a cylindrical frame with 26-cm diameter and 13-cm length,” augmented with “a water compartment (bolus) placed between the head and the antennas for microwave energy coupling and cooling of superficial tissues.”

For his research, the RF Module, developed to investigate electromagnetic wave propagation and resonance effects, proved crucial in simulating the specific absorption rate.

With the heat source ascertained, Rodrigues used the software’s CFD tools to compute the fluid flow in the water compartment. The optimal antenna configuration was a balancing act. He needed to hit the targeted tumor (a 2-cm diameter) with 40°-44°C temperature while keeping healthy tissues below 42°C.

“The feasibility of heating small targets in a head phantom using a novel microwave brain applicator is demonstrated with experiments and numerical simulations,” Rodrigues wrote.

In 2014, Dassault Systèmes SIMULIA launched the Living Heart Project, which aimed to produce a physically accurate digital human-heart model for effective cardiovascular analysis and treatments. The project began with about 10 partners, but it has now grown to include 150, encompassing researchers, clinicians, industry leaders and regulatory bodies in 25 countries, according to Steven Levine, senior director, Virtual Human Modeling and executive director, The Living Heart Project, Dassault Systèmes.

Many members have accumulated expertise and “are doing very advanced work with the model, including patient-specific treatment planning on entire cohorts of patients. They have also created gender-specific versions, pediatric patients with congenital defects and athletes,” Levine adds.

The model is available in the cloud as part of the Dassault Systèmes 3DEXPERIENCE platform. In the past two years, the annual Living Heart Symposium has also started hosting the Living Brain and Living Lung Project members.

“The heart model is also now connected to our system modeling software, which gives it far greater power and allows us to add models including the Living Lung and Living Liver to increase the full representation as needed,” Levine explains.

Much like using system-level analysis in automotive, the additional virtual organs increase fidelity in simulation. However, “adding fidelity adds computational demands, so we expect this to grow in value as computational power advances,” Levine reasons.

The Living Heart Project uses SIMULIA’s multiphysics solvers for structure, blood flow, electromagnetics and biological tools at the cellular and genomic scales, according to Levine.

While the solvers can faithfully replicate biological events, “they tend to assume a relatively static set of input conditions, such as material properties, so modeling time-dependent phenomena such as accelerated aging or tumor growth is a challenge,” Levine adds.

Project members are adding extensions to the original solvers to address this shortfall, but data is difficult to get.

“Clinical data has historically been collected for the purpose of guiding treatment, which leaves many holes when trying to use it to build models,” Levine says. With the project’s maturity and collected data sets of longer periods of time, “I’m optimistic we will soon be able to develop these time-dependent models,” Levine adds.

An Inside Look at AM Parts

Lumafield offers computed tomography (CT) scanners, not to use on human patients but on manufactured parts and products. They’re meant to be diagnostic tools to uncover imperfections and flaws invisible to the naked human eye.

Jon Bruner, product lead for Lumafield, says medical device makers tend to use his firm’s CT scanners to scan their prototypes as well as manufactured parts. It’s particularly useful to understand “the interactions between the different internal components,” he says.

For inspecting the exterior surface quality or accuracy, high-resolution 3D scanners would suffice. But for the components inside, CT scanning is the best approach. “If your medical device has a gasket with a seal, for example, you need to make sure the O-ring is properly closed. You can cut open the part to see the cross-section, of course, but that’s a destructive method,” Bruner explains.

rms Company, a supplier to the medical device industry, is now relying more on additive manufacturing (AM) for mass production. With direct metal deposition (DMD), the company can include lattices and gyroids, known for better bone adherence to textured surfaces. Such features are also becoming more prevalent due to the rising popularity of generative design software. But they also invite trapped powders and fragments, posing challenges in cleaning and inspection. 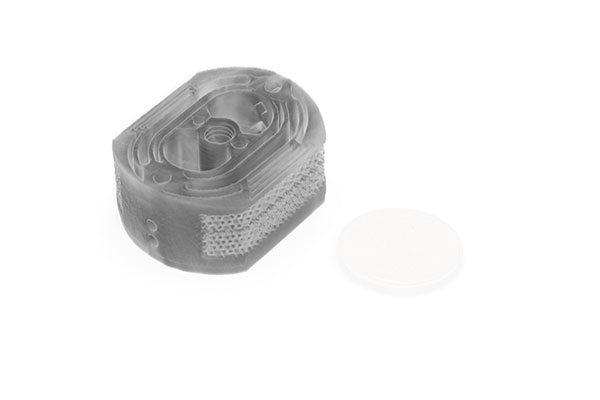 rms Company’s lattice-filled AM part (top), and the CT scan results of the part (bottom). Images courtesy of rms and Lumafield. 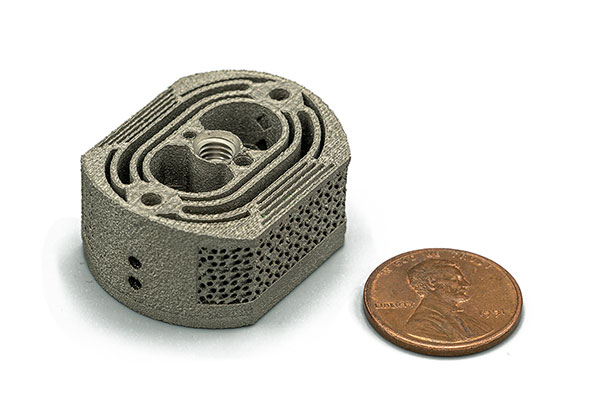 rms could inspect its AM parts with coordinate measuring machines; however, the method requires expert operators, and is time-consuming. With designers using algorithms to resize rms products incrementally, “a single spinal implant product can have over 100 different SKUs,” says Ryan Kircher, rms Company’s senior AM engineer. With Lumafield’s scanners, rms can inspect many more units in just a fraction of the time previously required.

“With AM, there’s porosity, consistency and dimensional tolerances. CT scanning is not just to see if the part meets the requirements; you also get better insights into how an AM part could fail,” says Bruner. In scan results, porosity or inconsistent material density is easily detected. Lumafield scanners can resolve features up to 25 microns, Bruner verifies. “Typical lattices in AM are 100 microns or larger, so our machine offers more than adequate resolution.”

Butterfly Network’s mission is to bring medical imaging to everyone around the globe. The company describes its lightweight handheld body-imaging devices as “ultrasound on a chip,” made possible by semiconductors, artificial intelligence and cloud technology. 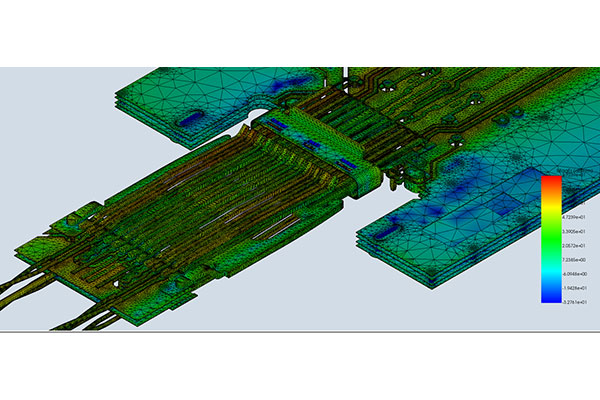 Last December, Butterfly Network adopted the Cadence Clarity 3D Solver “to support and enhance the design of its handheld, single-probe, whole-body ultrasound system,” according to an announcement from Cadence Design Systems.

“The Cadence front-to-back system design and analysis flow enables our engineers to identify design problems quickly and accurately and, more importantly, allows us to get products to the field sooner,” says Nevada Sanchez, co-founder and engineering VP of Butterfly Network.

The Clarity 3D Solver is an electromagnetic (EM) simulation software tool for designing critical interconnects for printed circuit boards, integrated circuit (IC) packages and system on IC (SoIC) designs. The software is architected to run on multicore clusters to speed up simulation.

Butterfly Network uses the finite element method solver that runs on CPU clusters only. Cadence also offers the Clarity 3D Transient Solver for finite difference time domain (FTDT) problems, which can run on CPU and graphics processing unit clusters. Many of Cadence customers install and use the software on premise; however, in June, Cadence launched Cadence OnCloud, a SaaS platform. The new offering includes the option to run Cadence Clarity 3D from a web browser.