Researchers and musicians alike are turning to FEA and CFD to help with instrument design.

Researchers and musicians alike are turning to FEA and CFD to help with instrument design. 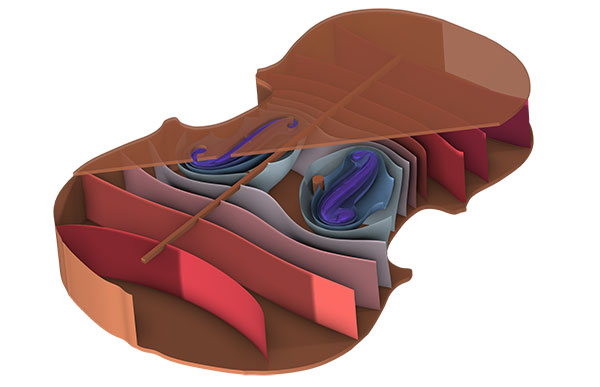 FEA of the standing acoustic pressure wave for the lowest resonant acoustic mode of a violin body. FEA can contribute to understanding an instrument’s timbre by computing resonant modes and frequencies, which serve as an acoustic fingerprint. Images courtesy of COMSOL.

SimScale enables engineering teams to access accurate and fast simulation, on their terms, without compromise. We make engineering simulation technically and economically accessible from everywhere, at any time, and at...
SimScale
Company Profile

Kevin Basier is a luthier or maker of stringed instruments such as violins or guitars. He is turning his artistry to the wonderment of engineering design technology. Bassier recently designed and built an acoustic violin that was made using generative design iterations thanks to assistance from engineers at the Autodesk Technology Center in Birmingham, UK.

Though engineering design software solves and perfects many things in the world at large, it is well on its way to making great strides in musical instrument design and engineering the perfect sound.

FEA and CFD for the Perfect Sound

“FEA has been used for a very long time to analyze vibrating bodies and determine their resonant frequencies,” says Richard Mitchell, senior director of product management with Ansys. “Work in this area started nearly 70 years ago where simplified beam-like models were initially used to study vibration characteristics of aircraft wings and engine blades. Since then, efforts to improve accuracy and fidelity of the models have continued in earnest.”

Mitchell points out that there is a direct relationship between the excitation of a structure and the sound or noise that the structure generates. Ansys customers typically use massive compute resources to better understand vibration characteristics of structural components and to design quieter aircraft engines, electric cars and household appliances like vacuum cleaners.

“Since all musical instruments, including stringed, percussion and wind instruments, rely on excitation and vibration of strings, membranes or resonance of an air column to make musical notes, the same technology to build quieter cars could be used to design musical instruments with highly refined and precise notes,” Mitchell says. 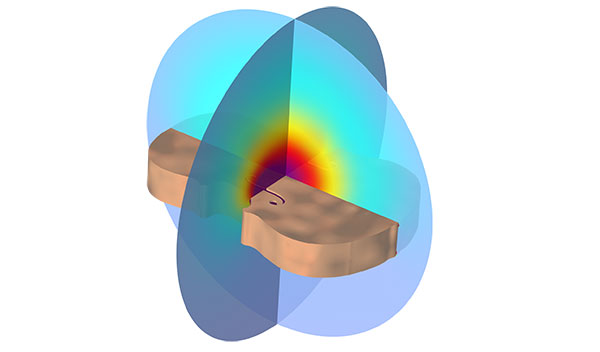 FEA is used to compute the sound pressure level for the lowest resonant acoustic mode of a violin. FEA can contribute to understanding the timbre of an instrument by computing resonant modes and frequencies, which serve as a kind of acoustic fingerprint. Images courtesy of COMSOL.

“For example, researchers use Ansys to help musicians refine designs of the sound box in guitars and violins by building simulation models that predict their resonance characteristics accurately,” Mitchell explains. “This is only possible by representing the wood grain in the body of the guitar or violin in an accurate manner. The rich material modeling capabilities allows researchers to present the wood grain direction, layers and the subtle differences in the structural properties of different wood species in a highly accurate manner.”

Dr. Paul Lethbridge is the director-product marketing for SimScale GmbH. Lethbridge is in Portland, OR, while the company is headquartered in Munich, Germany. Lethbridge says FEA and computational fluid dynamics (CFD) can help perfect musical instrument design.

“Both FEA (for structural and thermal simulation) and finite volume method (for fluid flow simulation) have seen quite a lot of application in the design of musical instruments,” says Lethbridge, who notes that many instruments/parts of instruments benefit from simulation.

“Structural vibration analysis can be used to simulate anything that is struck, plucked or bowed,” Lethbridge says. “The simulation provide insight into the frequency of vibration, the mode shapes, low and high order, and can also factor in effects of nonlinear materials (like wood or the membranes used for drums) and also temperature effects (structures tend to expand with increasing temperature, shifting resonant frequencies slightly even over a few degrees change in ambient temperature).”

He adds that researchers can apply CFD to understand air flow velocity and pressure distribution in woodwind and brass instruments, and some tools allow users to understand fluid-structural by coupling the structural and CFD physics bidirectionally, although he notes that this class of simulation is complex and computationally expensive, few people are using it for musical instrument design. 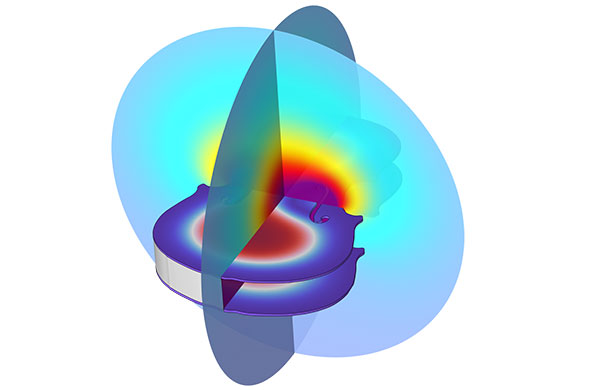 FEA of the standing acoustic pressure wave for the lowest resonant acoustic mode of a violin body. FEA can contribute to understanding the timbre of an instrument by computing resonant modes and frequencies, which serve as an acoustic fingerprint.

Design must incorporate the importance of resonance frequencies, together with other characteristics of sound, says Bjorn Sjodin is VP of product management at COMSOL.

“Depending on how a musician is playing an acoustic musical instrument, for example, a violin by applying powerful or gentle bow strokes, the resonant vibrational modes (vibrational shapes) of an instrument are excited to a varying degree at a discrete set of resonant frequencies,” says Sjodin.

“The set of resonant frequencies together with their relative amplitude determine the timbre, or tone color, of the instrument,” adds Sjodin. “Due to the importance of the resonance frequencies, a useful way in which an FEA can contribute to understanding the timbre of an instrument is to compute the resonant modes and frequencies, also called eigenfrequencies, which in this way serve as a kind of acoustic fingerprint.” 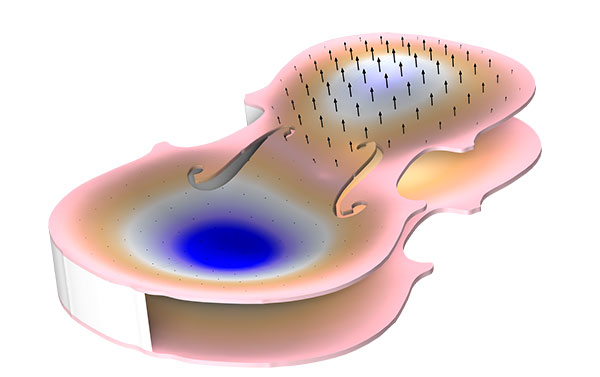 FEA is used to compute the sound pressure level and the structural vibrations for the lowest resonant acoustic mode of a violin. This simulation illustrates that an acoustic musical instrument needs to be seen as more than its structural component. The surrounding body of air is, acoustically speaking, also part of the instrument and will participate in shaping its sound by coupling strongly to the structural vibrations.

Sjodin explains that an acoustic musical instrument needs to be seen as more than just its structural component. Acoustically speaking, the surrounding body of air is also part of the instrument and will help shape its sound.

Sjodin points out, however, that one challenge when simulating acoustic instruments, is the many ways in which a musician can produce the sound. For example, there are many different techniques for bow strokes with traditional Italian names such as legato, staccato, and portato.

“Accurately representing such sound producing mechanisms can be computationally very time consuming and the friction forces involved can be very complicated to describe,” he says.

“Here, FEA is typically used for lower, or bass, frequencies whereas higher frequencies are analyzed by other methods such as ray acoustics methods,” says Sjodin. “In a way, a room or concert hall is in itself a form of musical instrument, but the analysis usually has a different focus.”

As he explains, there is a common analysis task to compute a set of room metrics to determine the room’s reverberation characteristics. Such a room acoustics analysis can give information on the reverberation time, or how “long” the room will make a sound last, as well as the room’s clarity index and definition, which are terms used to describe the interplay between the direct sound that reaches a listener relative to reverberated sound. 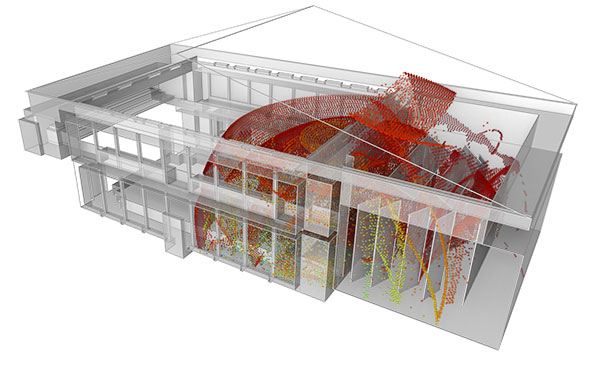 The acoustics of the Small Hall in the Konzerthaus Berlin simulated using COMSOL Multiphysics. In this model, a ray acoustics method is used to determine the reverberation properties of the space..

Ansys’ Mitchell looks to the future of musical instrument design as not only employing FEA and other technologies, but also using different materials.

“As technology has advanced and as high-quality wood becomes scarcer, musicians are embracing the once unthinkable idea of using instruments made of composite materials or plastics,” says Mitchell.  “Today carbon fiber or graphite composites are widely used to make a variety of instruments. They are more durable, water resistant and impervious to temperature and humidity changes.”

Celebrating the Union of CAD and CAM
Milestone mergers and partnerships brought design and manufacturing closer.
Printing in the Fourth Dimension
Smart materials and new design capabilities will usher in a generation of self-modifying structures with applicability for medical, aerospace and various other innovative uses cases.
AI and ML Transforming Simulation
Use of artificial intelligence and machine learning algorithms in FEA increase predictive performance, speed up processing time.
Editor’s Picks: December 2-December 8, 2022
One of the picks will be chosen as DE’s Editor’s Pick of the Week.
Quick Electromagnetic Analysis of PCB Design
Autodesk Fusion 360 Signal Integrity Extension by Ansys reduces costs and improves compliance.
Autodesk Company Profile 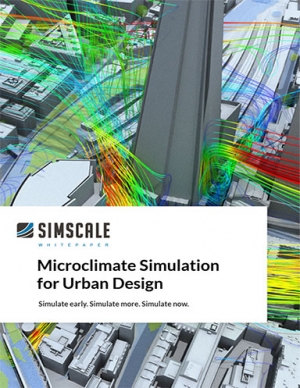 Microclimate Simulation for Urban Design
A cloud-native simulation platform allows architects and engineers to simulate and analyze high-fidelity models with complex physics for urban design.
FREE WEBINAR JAN. 24, 2023: Parametric and Parallel Simulation in the Cloud for Automotive, Aerospace & Manufacturing
In this webinar, learn how you can leverage SimScale’s cloud-hosted features to run parametric and parallel simulation for rapid assessment of design options.
How Would You Redesign the Star Wars TIE Fighter?
CFD experts run airflow analysis on the iconic ‘Star Wars’ battlecraft to dissect its aerodynamics.
Cloud-Native CAE Enables Innovation for Remote Workers
Cloud-native CAD and CAE allows engineering teams to work remotely very effectively. Set up your own cloud-native simulation via the web in minutes by creating an account on the SimScale platform. No installation, special hardware or credit card is required.
Turbomachinery, Propellers, & Pump Simulation
SimScale provides high-fidelity engineering simulation tools for propeller, fan, compressor, pump, and turbomachinery applications that are both technically and economically accessible for designers and engineers, at any scale, in the cloud.
Simulating the Indoor Environment
Discover the benefits of cloud-native engineering simulation applied to thermal comfort and air quality analysis. SimScale offers a technically and economically accessible solution for indoor environmental simulations that can account for the complex physical phenomena needed to design healthy and...
SimScale Company Profile