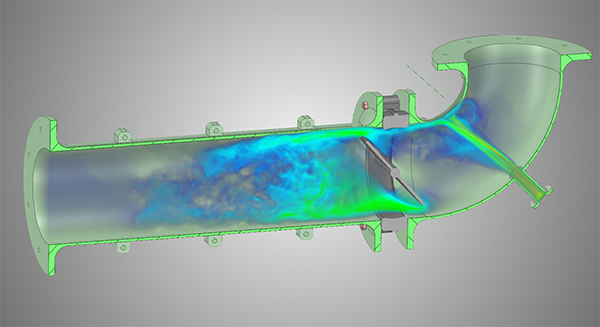 ANSYS Discovery Live simplifies the complexities of simulation with a modern interface and fast processing. Image courtesy of ANSYS.

Reinventing VR and Collaboration in 2020
Join us for a live webinar to see how NVIDIA® Quadro® RTX™ and HTC are bringing people together...
Peripherals Resources

There’s an old saying: Fight fire with fire. New technologies such as artificial intelligence, Internet of Things, embedded processing, and digital twins are great innovations, unless they become a new source of complexity. When hindrances to efficiency are rooted in technology, sometimes it takes technology to break the logjam.

Keep Complexity Beneath the Surface

It is a sad axiom of product development that the most technically demanding engineering assignments are usually supported by the most complex software products. But it doesn’t have to be that way.

One of the newest simulation products on the market, ANSYS Discovery Live, reduces the complexity typical of simulation in two ways: It offers a modern user interface (UI) that includes direct editing of geometry, and it takes advantage of parallel processing. The modern UI comes from SpaceClaim, a 3D CAD product acquired by ANSYS in 2014. The result is a product that offers new freedom in design exploration by allowing changes to form as part of the simulation process. Discovery Live also takes advantage of the massive processing power of NVIDIA GPUs. Real-time visualization of flows, deformations, and other physics are possible because the software makes use of CUDA, NVIDIA’s parallel computing and programming platform.

The result is a product that does multi-physical analysis in real-time, in a UI accessible to design generalists. The software automatically decides the appropriate meshing strategy and processes the model, greatly simplifying one of the most complex parts of simulation. It took the combination of new CAD technology and GPU-driven parallel processing power to delivery a simplified yet powerful approach to upfront product simulation.

Dr. Jon Peddie is a widely respected industry analyst who has been closely aligned with the graphics side of computers since the mainframe days. He can explain with a series of charts and tables why graphics are the most important aspect of any computer-based work process, but he only need four words to summarize it: “See more, do more.”

“There are so many ways to see more,” says Peddie. “Multiple monitors, big monitors, rear projectors, and even headsets.”

Peddie’s research firm (Jon Peddie Research) regularly studies productivity as it relates to visual computing. In its most recent survey, JPR found that users of multiple monitors have an average expected productivity increase of 42%, when compared to users doing similar tasks but with only one monitor.

Studies show the use of multiple monitors increases productivity by up to 42%. Image courtesy of Dell.

To power multiple displays, especially high-resolution 4K monitors, a workstation with a discrete graphics card is recommended. Even in motherboards that do support more than one monitor, there can be lag when moving between displays. Professional graphics cards support multiple, high-resolution monitors without lag, and include software to streamline the process. For example, NVIDIA says its Mosaic multi-display technology, featured in NVIDIA Quadro graphics cards, allows any application to span across up to 16 high-resolution panels or projectors from a single workstation, without sacrificing performance or power. NVIDIA nView desktop software can be used to manage a system's single or multi-monitor workspace, according to customizable usage models.

The next frontier of fighting complexity and improving productivity through increased visualization is with virtual reality and augmented reality. VR startup WorldViz sees increased adoption of VR “throughout every step of the product development lifecycle,” according to CEO Andrew Beall. At first, companies use VR to visualize prototypes as 3D models. “This gives stakeholders a way to see and even interact with early prototypes at scale while saving significantly on the cost and waste of creating physical mock-ups.”

Product development teams in multiple locations can do virtual walkthroughs simultaneously with enterprise VR tools such as WorldViz Vizible. Image courtesy of WorldViz.

For global companies with distributed teams, Beall says VR products like WorldViz Vizible “allows groups of people to join together in a virtual space without the need for travel to visualize products, provide feedback and tackle problems before costly mistakes arise.” Going forward, Beall foresees extending VR through the value chain, working with suppliers, distributors, and customers for both sales and training.

Lost in the Shadows

Sometimes individuals, workgroups, or even entire departments acquire and use products or IT services not approved or supported by corporate IT. Such unsupported products are known as Shadow IT. The use of Shadow IT is well meaning, but it nonetheless can be the source of collaboration bottlenecks or security risks; clog bandwidth; and bypass compliance protocols.

Too Much of a Good Thing

Dow Chemical is a widely diversified global manufacturer. It was one of the earliest enterprises to adopt electronic document management (EDM) in the 1990s. Over the years, the company grew rapidly by acquisition. A recent internal Six Sigma audit revealed document management had become a significant problem; there were more than 25 separate systems in use, including many departmental home-grown solutions.

“We had usability issues, constrained access, limited ability to collaborate across sites, and inefficiencies from not easily finding the right document versions,” says Dow executive Gregg Schuler. “One system took 45 minutes to sign in a document.”

The company decided the answer was not to add one more system, but to replace all the existing document management solutions with one that best matched the company’s needs. The new document management system would need to work with both discrete and process plant design and operations, and both 2D and 3D CAD data. To match a corporate directive, the new system needed to offer an “asset view” within each plant, and needed to work with the wide range of existing metadata sources, legacy and current.

Two products were selected for an in-house trial. Each vendor was required to load 100,000 existing Dow documents. One system took weeks. The winning software — Synergis Adept EDM/PDM — did it it in six days. Adept offers a “wrapper” approach to existing data, unlike other document and data solutions that require a separate conversion process.

Synergis Adept streamlines the process of working with a wide variety of data types and file formats, including CAD. Image courtesy of Synergis Software.

The original purpose was to replace existing functionality, but Dow discovered the more it trusted the capabilities of Adept, the more ways they found to extend its use. When they started using Adept’s replication service to share data between locations, instead of relying on existing corporate servers and methods, time of access to information improved by 80%.

With all of the complexity that comes with today’s product design and development process, it’s important to challenge the status quo and look for solutions that can counter it. Engineering teams that continue to struggle by applying yesterday’s tools to today’s product design and development challenges are putting themselves at a significant disadvantage.