In the Path of the Wildfires 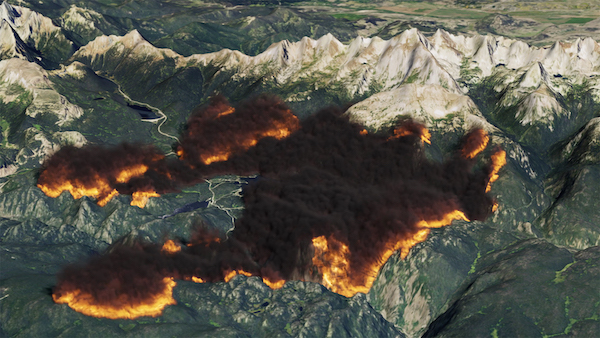 During GTC Fall 2021 in November, highlighting the potential of NVIDIA Omniverse™ Enterprise, NVIDIA CEO Jensen Huang cited examples of high-profile customers who have been using the immersive environment to simulate complex real-world events and operations. The list included Lockheed Martin’s use of Omniverse Enterprise to analyze the spread of wildfires, Ericsson’s use to optimize 5G signal propagation in large cities, and BMW’s use to simulate automotive plant operations.

“The estimated damage total and cumulative economic loss [due to wildfires] is expected to be between $130 billion and $150 billion,” according to AccuWeather Founder and CEO Dr. Joel N. Myers.

For Lockheed Martin, fighting wildfires begins with starting one using AI inside Omniverse Enterprise. “NVIDIA and Lockheed Martin are partnering to build an advanced AI- and digital twin-enabled fire response system to improve fire prediction and suppression efforts,” according to NVIDIA’s announcement.

The AI-powered fire-fighting efforts involve not only NVIDIA and Lockheed Martin but also the U.S. Department of Agriculture Forest Service and the Colorado Division of Fire Prevention & Control (DFPC).

In a company blog post, Anthony Robbins, VP of Federal, NVIDIA, wrote, “Omniverse Enterprise allows fire behavior analysts to see the predictions in a digital twin of the environment. Using the real-time, multi-GPU scalable simulation platform, Lockheed Martin creates visualizations of the predicted fire movements and studies their flow dynamics across a digital replica of the landscape.”

In a GTC Fall 2021 fireside chat with NVIDIA (“Building the Ultimate Partnership,” Session A31630), Steve Walker, VP and CTO of Lockheed Martin, explained that, by applying AI to the problem, government agencies can “figure out where the fire will start ahead of the times, how it will spread based on weather and other factors, and to track the progression of the fire, then call in the appropriate resources at the right time, at the right place, in a coordinated fashion.”

Real-Time Data at Its Core

The joint AI-development activities will take place in a lab based in the Silicon Valley, according to NVIDIA’s announcement. Lockheed Martin and NVIDIA expect the technology to become “an end-to-end AI-driven planning and orchestration platform, that combines real-time sensor data about the fire with other data sources on fuel vegetation, topography, wind and more to predict the fire’s spread.”

One of Lockheed Martin’s Tools to manage the challenges of wildfire season is its Cognitive Mission Manager (CMM) system, an AI-driven planning and orchestration platform that combines real-time sensor data about the fire with other data sources such as fuel vegetation, topography, and wind conditions.

“The combination of Lockheed Martin and NVIDIA technology has the potential to help crews respond more quickly and effectively to wildfires while reducing risk to fire crews and residents,” said Shashi Bhushan, Principal AI Architect at Lockheed Martin.

NVIDIA DGX systems are designed for AI, Machine Learning, and High-Performance Computing (HPC) workloads, such as natural language processing, AI-based translation, and image processing. These systems are available from NVIDIA partners such as Dell Technologies.

Omniverse Enterprise is offered as a subscription, priced beginning $9,000 per year. It’s available through NVIDIA partners such as Dell, with the option to deploy it on Dell Precision workstations, Dell EMC VxRail, or Dell EMC PowerEdge servers. For more, visit the dedicated product page for Omniverse Enterprise.