The AiR Lab designs and prints its own drone prototypes while developing hybrid controllers.

The AiR Lab designs and prints its own drone prototypes while developing hybrid controllers.

The AiR Lab at Aarhus University in Denmark is applying AI and intelligent controllers to autonomous robots and drones. Image courtesy AiR Lab.

As autonomous vehicles and unmanned aerial drones are adopted for more applications, advanced control systems will be required to direct them safely, particularly in crowded urban environments. Researchers at Aarhus University in Denmark are working on ways to develop these controllers, and to integrate artificial intelligence to improve their operation.

The team is also designing and 3D printing is own drones and other equipment as part of the testing process.

Aarhus University’s Department of Engineering operates the Artificial Intelligence in Robotics (AiR) Laboratory, which includes a 15x15x4.5m flight arena equipped with 12 Vantage tracking cameras from motion-capture specialist Vicon. The cameras, in concert with Vicon’s Tracker software, enable researchers to track multiple fling objects in six-degrees of freedom with a range that can achieve millimeter accuracy. The lab can test ground and flying robots for a number of different applications. 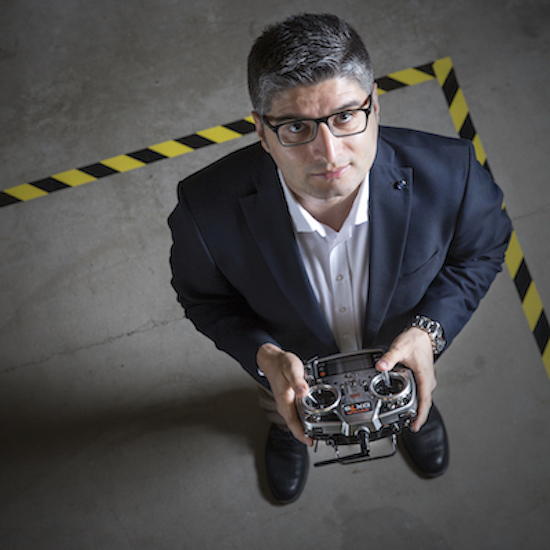 They are particularly focused on autonomous robots, including drones, and the use artificial intelligence to operate such systems. The team’s primary research interests include control systems, computational intelligence and robotic vision for guidance, control, and automation of unmanned vehicles.

“We are interested in intelligent control,” says Dr. Erdal Kayacan, professor in the Department of Engineering and director of the AiR Lab. “If you take a sufficiently long enough time, you can design a good controller, but there are two problems. First, it takes a lot of time. Second, if the operational dynamics change over time it will make the controller suffer. What if there are stronger winds than were present than when you designed the controller? Or what if the weight of the drone changes, as in a cargo delivery application?

“We have proposed some intelligent controls that can learn the answer to those questions over time,” Kayacan continues. “Now our direction is in using AI, so not only is there a navigation and control algorithm, but we can ask the AI engine to make some decisions and increase the autonomy level.”

Racing to Innovate with AI and 3D Printing

Kayacan says the lab is currently investigating the type of controls required for drone racing, which Lockheed Martin has made investments in recently. “Why is this problem important? It is beautiful because you are competing with a human pilot,” Kayacan says. “The drone has to see the correct gates, estimate where they are and then decide the trajectory, and you need a really good controller. Can we compete with a human pilot? Over the next five to ten years, it will happen.”

The lab uses a mix of off-the-shelf drones and drones that the team designs from scratch and creates using an filament fusion fabrication 3D printer.

“We need hardware when we are testing other types of applications,” Kayacan says. “For example, one of my Ph.D. students is designing an aerial manipulator with a drone, which has two robotic arms. It has to be light. We have designed everything in SolidWorks, done a structural and FEA analysis, and we use the 3D printer to build it.”

Kayacan says the lab primarily uses 3D printing for multi-rotor drones. “For fixed-wing drones, we have been disappointed, because you need a high degree of accuracy on the wing,” Kayacan says. “it’s difficult to do that with existing 3D printers, because you need some post-processing to get the wings smooth, and you can’t print the entire wing.”

“For multi-rotor it makes sense, because you don’t need precision but we need to produce the prototypes fast,” Kayacan continues. “We’re very happy with it in that case. I design something, we put the CAD model into the 3D printer, go home, and when we come to eh office the next day the part is ready.”

In May, the research term published a paper, “An Intelligent Hybrid Artificial Neural Network-Based Approach for Control of Aerial Robots,” in the Journal of Intelligent & Robotic Systems. It outlines a proposed hybrid control approach that would use AI to enhance the controller so that these autonomous drones could better respond to emergency situations.

Kayacan says this hybrid model will benefit from the use of simulation and AI. “This is an enhancement to the navigation and other algorithms,” he says. “We know something about the system, but there are some alternatives. Why don’t I collect more data and train the network in order to enhance the controller during operation?”

However, he believes simulation has its limits when it comes to autonomous aerial vehicles. “If everything is fixed, I can trust the simulation,” Kayacan says. “If you leave the lab and everything is changing, there are wind guests and other obstacles, then I trust it less.”

Kayacan is bullish on the future of autonomous aerial drones for commercial and other uses. “The technology is ready,” Kayacan says. “The tech necessary for aerial taxis is here. We don’t need to invest in something more. The problem is safety. Drones can’t have the same level of computing redundancy as a commercial aircraft, because you need something lightweight and cheaper. Who is going to trust this taxi? Who is going to fly it?”

Because air taxis will fly over cities, there will need to be new rules about air traffic control and for making emergency landings in heavily populated areas. “This is a challenge for the urban environment,” Kayacan says. “In some countries that are more rural, it’s not as big of a problem. In Indonesia, which has many islands, if someone is sick it takes a long time to get a blood test or get to a doctor. Imagine having a drone that just flies the blood test to the hospital and gets the results back in an hour?”

Kayacan expects that drones will be used more prevalently in the future—provided someone can solve the safety and power management problems.

“We have been very disappointed in batteries,” Kayacan says. “Five to 10 years ago, we had an energy level of 200 watts per kilogram in the battery. Now, we are at the same level, and there has been no progress. That limits our operations, because the drone can fly maybe 15 minutes, and that is not enough. Once we solve the safety and battery issues, we will see drones everywhere.”