Interactivity and built-in compute power bring the latest incarnation of the company’s technology to a whole new level.

Interactivity and built-in compute power bring the latest incarnation of the company’s technology to a whole new level. 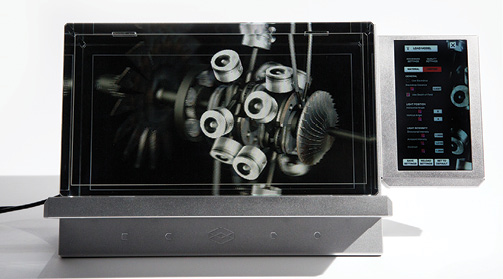 As a static display unit, The Looking Glass Factory’s holographic display box offers the Wow factor, but not much else. However, interactivity and built-in compute power bring the latest incarnation of the company’s technology to a whole new level.

The company has been developing and selling the displays for about three years now. The latest addition to the company’s portfolio is the Looking Glass Pro. The Pro doesn’t need a connection to a PC or workstation. It had its own built-in Intel NUC 8 VR NUC8i7HVK computer, a 15.6-in. display area and weighs 25 lbs.

From CAD to Holograms

The display units support content authored in Unity, Unreal, Three.js and more. You load the model into the Looking Glass environment as OBJ, FBX and other neutral 3D formats exportable from CAD programs. The company has assembled about three dozen holographic content and games, freely accessible to users.

Looking Glass’s front-facing surface is touch-responsive, so you can use pinching, poking, stretching and other standard methods to zoom in, pan and rotate the loaded 3D models and scenes. But upgrading the display with an Interaction Accessory Pack (a Leap Motion sensor) brings more interactivity.

Leap Motion, a motion-detection sensor the size of a Starbucks coffee mint box, can translate hand positions and gestures and apply them to the holographic objects. If the loaded model contains proper physics and kinematics, you can, for example, poke, punch or pull on it to get realistic responses.

If properly adapted, the Looking Glass holographic display could offer new ways to apply stresses and loads in 3D models in simulation software. Currently, in the 2D-driven mouse-and-keyboard paradigm, you need to rotate the model, select the surface and apply the forces as numeric values. But what if you can simply press down or pull on surfaces and structures to see deformation as instant feedback? It’s a vision The Looking Glass cofounder Alex Hornstein wants to explore.

“Right now, you can do simple tasks, like displaying scenes built in SIMULIA in Looking Glass for marketing purposes,” he says. “But the best approach is a native-level integration with SIMULIA. With that kind of approach, the holograms in Looking Glass can retain the same model joints and constraints in SIMULIA. It’s something we’re interesting in pursuing in collaboration with Dassault Systèmes SIMULIA,” says Hornstein.

If you bring CAD assemblies into AR-VR (augmented and virtual reality) environments or into The Looking Glass display as neutral 3D file formats, you usually lose the assembly mating conditions. Only a native-level integration would allow you to retain such intelligence. If an assembly model can retain such detailed kinematics in the AR-VR environment or holographic displays, it could be a foundation for visualizing digital twins.